Studying Sentence Patterns to Improve Your Writing: Part One

Update Required To play the media you will need to either update your browser to a recent version or update your Flash plugin.
By John Russell
04 August, 2016


Many English learners have spent a lot of time studying the parts of speech: adjectives, nouns and verbs, for example. But sometimes studying the English sentence from a larger perspective is useful.

One way to get a bigger view of English is to study common sentence patterns.

The English language has many patterns. In the book Rhetorical Grammar, author Martha Kolln describes seven common sentence patterns. In other writings, she says that 95% of sentences in English fit into basic patterns. 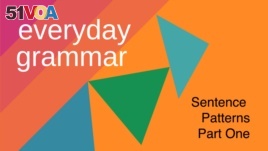 Understanding and mastering common patterns will not only help you do better on grammar tests, but improve your writing skills, too.

For example, here is a passage written by Ernest Hemingway, a famous American author. It comes from the short story "A Clean, Well-Lighted Place." The story is one of the most famous ones that Hemingway wrote.

"This is a clean and pleasant café. It is well lighted. The light is very

Do you notice patterns in these sentences? If you do not recognize them, you will by the end of this report! In this installment of Everyday Grammar, we are focusing on two of the most common patterns in English.

Consider a line from the song "Beautiful," by Christina Aguiliera:

The line shows the foundation of most sentences in English:

A phrase is a group of words that act as a unit. A noun phrase has an important noun, the headword noun, along with words and phrases that give more information about it. The subject of a sentence is the whole noun phrase – not just the noun!

The predicate is a verb phrase with a main verb and the words and phrases that give more information about it.

If you take the sentence from the Aguilera song, you can analyze it like this:

In this sentence, the adjective beautiful acts as the subject complement. It describes "I," the subject.

So, the song lyric is the first important sentence pattern in English.

The subject complement can be either an adjective or a noun phrase.

For example, consider this line from the music group Queen.

"We are the champions.

We are the champions."

In that line, the subject is "we."

The predicate, "are the champions," contains the BE verb along with a subject complement, "the champions." This noun phrase is describing the subject, "we."

You might find sentences that appear more complicated but use the same basic structure.

Consider this song by the Beatles:

At first, the sentence appears complicated, but the basic structure of the sentence remains the same: Subject + BE + Subject complement.

The difference is that the sentence has added information, a noun that is the same as the subject of the sentence.

Baby, you're a rich man.

The Subject + BE + Subject Complement pattern is not the only pattern you will find with the verb BE.

1) My friends are at the concert.

2) The test was yesterday.

In these examples, the subject and the BE verb are followed by adverbials, which are, in this case, words or phrases that tell where or when.

In the first sentence, the adverbial structure is the prepositional phrase "at the concert."

In the second sentence, the adverbial structure is the adverb "yesterday."

These examples show another common BE structure: Subject + BE + Adverbial.

What does this have to do with Hemingway?

Think back to the Hemingway passage from the beginning of this story.

"This is a clean and pleasant café. It is well-lighted. The light is very

But if you look closely, you will see every sentence in the passage uses Pattern #1. Two of the sentences use conjunctions, but they still depend on the same basic pattern.

"This is a clean and pleasant café. It is well-lighted. The light is very

Hemingway was famous for his short, declarative style. However, he did not write using basic pattern 1 and 2 sentences only! Good writers know how to make their sentences come to life. They do not write the same sentences over and over again!

To help you start recognizing these patterns, I am going to give you four more sentences written by Ernest Hemingway.

Your homework is to identify which of the two basic patterns he is using. Please remember that sometimes Hemingway uses additional words. Just focus on finding the basic structure – pattern 1 or pattern 2. We will give you the answers next week in the comments section and on 51VOA.COM.

Here are the sentences:

- from "The Short Happy Life of Francis Macomber"

– from "A Clean, Well-Lighted Place"

– also from A Clean, Well-Lighted Place

4. "The treatment is for tomorrow."

– from "Great News from the Mainland"

adjective – n. a word that describes a noun or a pronoun

perspective – n. a way of thinking about and understanding something (such as a particular issue or life in general)

predicate – n. the part of a sentence that expresses what is said about the subject

analyze – v. to study (something) closely and carefully

complement – n. a word or group of words added to a sentence to make it complete

champion – n. someone or something (such as a team or an animal) that has won a contest or competition especially in sports

additional – adj. more than is usual or expected