Update Required To play the media you will need to either update your browser to a recent version or update your Flash plugin.
By Dr. Jill Robbins
13 April, 2016


Teachers of English may hesitate to teach debate because they think it is beyond their students' language ability, or proficiency.

But debate can be a powerful tool. It can help students learn to speak naturally and to listen carefully.

Professor Charles Lebeau teaches English and debate in Japan. He wrote "Discover Debate" with Michael Lubetsky. The book helps English teachers and learners understand how to carry on a simple debate. 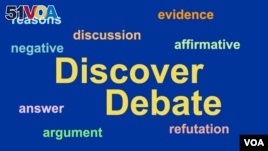 The "Discover Debate" approach has three stages: creating a visual aid to communicate an argument, presenting the argument and answering the other team's argument.

Each stage puts increasing demands on language ability. It begins with a pre-debate experience.

When teaching debate to English learners, Mr. Lebeau recommends beginning with "controlled practice." Students work in pairs to practice saying opinions and giving reasons in short conversations. They learn to identify opinions and arguments about everyday topics, such as sports stars, foods, weather and habits. This controlled practice gives students the basic language skills they need to carry on a debate.

Teachers may be tempted to give students serious topics, such as "People should stop using nuclear power." However, Mr. Lebeau cautions that English learners may not have the necessary language ability to handle such topics. More serious topics often require special vocabulary and research.

"When I'm introducing specific skills, step-by-step, I want to use a really simple, fun topic, so they already can understand the content. The content is not part of the challenge; the vocabulary is not part of the challenge, it's something they are very, very familiar with, so we can focus on the skills. So the topics for introducing the skills can be simple and fun – like, for example, cats make better pets than dogs."

Mr. Lebeau's classes in Japan are like many in universities; they have 40 to 50 students. He has students form debate teams of three or six, depending on the total number of students. Each team creates a visual aid to show their thinking on the topic.

In last week's article, we explained the visual aid. The visual is a house: a roof represents an opinion, pillars are the reasons supporting the opinion and the foundation is the evidence.

Mr. Lebeau says creating the visual aid is not a verbal skill. It is a thinking skill. Language proficiency, he says, is not really required.

In the next stage, students present their argument. They have to do some talking, but not too much.

"They point to the visual, to the house, ‘this is our opinion' - the opinion is on the house. 'These are our reasons.' And the reasons are on the house. 'Let me explain each reason.' The visual can do a lot of the talking for the team; for the student."

Mr. Lebeau recommends pausing for the opposing team to develop their answers, or refutations. Each team might go to a different area and discuss the weak points in the opposing argument.

Students must first think about the arguments carefully. In "Discover Debate," Michael Lubetsky and Charles Lebeau include a guide to help students evaluate arguments. The evaluation also takes advantage of the visual aid of a house.

Students are asked to look for building flaws, or problems. They identify things that are either "not true" or "not important."

Students can write easily remembered abbreviations and simple statements on their opponents' houses: "NT" for not true, "NAT" for not always true, or "NNT" for not necessarily true. For true statements they feel are not important, they can also write "It's not relevant," "It's not significant" or "It's easy to solve."

These simple expressions make it easier for students to refute their opponents' arguments.

"Cats are cheaper than dogs - maybe they're a couple dollars cheaper so it's not really significant. And it's easy to solve: Cats are cleaner than dogs, yes, in general, that's true, but it's easy to solve, give your dog a bath. They can draw these on the house, and what it does is, it takes away some of the pressure on the speaking."

"With a large class I'll have several debates running at the same time. I'll direct traffic with a stopwatch and say, 'Okay, time's up, so next, it's the other team's turn.' We can manage a large class that way."

"Just having the team present their case, and present their refutations, is sufficient, and usually a lot of fun, and everyone feels that they have accomplished something. I always tell them, ‘Everyone's a winner, we've all done a good job.'"

Mr. Lebeau says sometimes he asks the rest of the class to vote on which side won. Asking for audience feedback gives the lesson a good ending. But, he says, additional discussion depends on the situation and the level of the students.

Next week, in Part Three of "Successful Debate," we will explain the reasons for learning to debate in business as well as in the academic world. We learn how debating gives students a better understanding of Western culture and lets students practice critical thinking.

caution - v. to warn or tell (someone) about a possible danger, problem, etc.

refutation - n. act of proving that something is not true

abbreviation - n. a shortened form of a word or name that is used in place of the full word or name

proficiency - n. how well a person does something

Now it's your turn. Do you teach or study debate? What approach works for you? Write to us in the comments section.