Update Required To play the media you will need to either update your browser to a recent version or update your Flash plugin.
By Anna Matteo
10 February, 2015


In the middle of the 1980s, thousands of boys from Sudan escaped the country's civil war by walking. They walked for weeks, for months, for more than a year. They walked up to 1,500 kilometers across three countries.

They are the so-called "Lost Boys of Sudan" and they had little time for games.

But one of them did learn a game to help him ignore his hunger in a refugee camp. The game was chess. This boy became an expert. Soon this "Lost Boy of Sudan" found his way to the United States. And now he teaches chess to children in the New York City area. 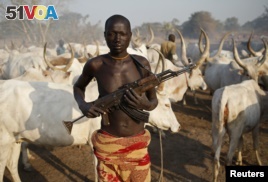 A man from Dinka tribe holds his rifle in front of cows in a Dinka cattle herders camp in central South Sudan, December 14, 2013. (REUTERS/Goran Tomasevic)

His name is Majur Juac. And he has come a long way in miles and in experience. Today, Mr. Juac shares his chess skills with students in public and private schools, in chess camps and at other events.

"It is very important to control the center of the board ..."

Mr. Juac is from the Dinka tribe.

Life as a refugee

During Sudan's civil war he was forced out of the country. He fled to Ethiopia with 20,000 other Lost Boys

Mr. Juac describes a dangerous trip where half of the young travelers did not survive. The boys had to kill wild animals for food. Sometimes they had no water to drink. Mr. Juac says they walked almost a thousand miles.

They made it to Ethiopia. Then, civil war broke out in that country. Majur Juac and his friends had to flee again. Many died trying to cross a river because they did not know how to swim.

"There was (were) animals while we were walking. And there was about a thousand-mile walk and sometimes there was no water. And when the kids were in Ethiopia, we have to go back and cross the river and in that river a lot, a lot actually drowned. People didn't know how to swim."

Majur Juac landed in Kenya and lived in a refugee camp. It was there that he taught himself to play chess. He spoke to the Wall Street Journal newspaper about playing chess there. He said the United Nations had provided the chess board. He said he played to avoid thinking about his constant hunger. But he grew to love the game and soon he was defeating everyone he played.

In 2004, Majur Juac arrived in the United States. He began working as a security guard. He continued to play chess. He told the Wall Street Journal that he went to a chess tournament in New York while visiting a friend there. He had only meant to watch the tournament. Instead, he entered it. He finished as tournament champion.

That competition led to the connections that began his life as a chess teacher.

Mr. Juac says he believes chess is more than a game. He says chess helps prepares young people for life by teaching them patience and math skills.

"Some kids are not interested, so it's your job to make them like the game, to explain to them what chess is going to help them with. Like, I can tell, this game will give you patience, help with your calculations, improve your math skills."

A woman named Julie Cathone is a second grade teacher at Public School, or PS 153 in Queens, New York. She agrees that chess can teach a child many life skills such as planning before you make a move.

"It definitely helps them with math skills and it helps them thinking ahead and planning before they make a move and that's the key to chess."

Meghan Kelley is the principal at PS 153. Ms. Kelley says Majur Juac is living proof that a person can overcome great difficulties. She says not only did he discover what he loves to do, but he is also able to make a living doing it. For this, she calls him a role model, a person who others respect and try to be like.

"What a role model. I mean when you think about just overcoming, when we think about finding what you love and turning that into your life's work. The way he interacts with the children is amazing."

Mr. Juac enjoys the freedom he has in the United States as much or more than his love for chess. He also loves teaching chess to young people.

His supervisor Michael Propper says, as a teacher, Majur Juac has one great advantage – his unassuming and humble nature.

"I think he's believable. I think that they look at him and he's so unassuming that they feel like they can do what he's doing and that it's plausible to them that as great as he is and as humble as he is, that perhaps they can be too."

Majur Juac still has a big goal ahead of him. That goal is to become an international chess master. With his skill, patience and strength of mind, Mr. Juac's supervisor and co-workers say they are sure he will reach his goal.

VOA Correspondent Bernard Shusman reported this story from New York. Anna Matteo wrote in for Learning English with background material from the Wall Street Journal. Caty Weaver was the editor.

chess – n. a game for two players in which each player moves 16 pieces across a board and tries to place the opponent's king in a position from which it cannot escape

career – n. a job or profession that someone does for a long time

tournament – n. a competition that involves a series of games with many players or teams and that usually continues for at least several days

role model – n. someone who another person respects and tries to be like

unassuming – adj. not having or showing a desire to be noticed, praised, etc.

humble – adj. not thinking of yourself as better than other people