Update Required To play the media you will need to either update your browser to a recent version or update your Flash plugin.
By VOA
02 January, 2016

The explosion occurred in the Pakistani city of Mardan. The blast took place outside the door of a government office. The office was the National Database and Registration Authority. That office was in charge of issuing national identity cards.

The attacker arrived at the office's gate on a motorbike. The cyclist was stopped by a security guard. He detonated an explosive vest, according to a witness. An investigation into the identity of the bomber is underway. 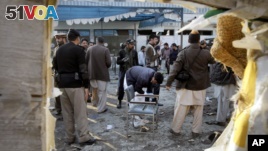 A Pakistani official said if the bomber was not stopped at the gate, the death toll would have been higher. It is estimated that the rider was carrying up to 12 kilograms of explosives.

A BBC report said about 50 people were wounded in the blast. Some were injured critically. Most of those killed or injured were civilians.

The attack is one of the deadliest in Pakistan since a December 2014 massacre left 150 students and teachers dead in Peshawar, the BBC reported.

A faction of the Pakistani Taliban said it carried out the attack. In a statement sent to VOA, the group said it targeted the office because it is part of Pakistan's anti-terrorism war.

But a spokesman for the mainstream Taliban in Pakistan said the Taliban had nothing to do with the bombing in Mardan.

Ayesha Tanzeem and Ayaz Gul wrote this story for VOAnews.com. Jim Dresbach adapted it for Learning English. Kathleen Struck was the editor.

cyclist – n. some who rides a motorcycle or bicycle

detonate – v. to explode or to cause something to explode

massacre – n. the violent killing of many people

faction – n. a group within a larger group that has different ideas and opinions than the rest of the group