Update Required To play the media you will need to either update your browser to a recent version or update your Flash plugin.
By Dan Friedell
25 March, 2016


A Kurdish commander in Iraq says the Islamic State terror group recruits children as young as eight-years-old to carry out suicide attacks.

Sirwan Barzani is the commander of the Kurdish Peshmerga fighters in Iraq. He says IS is teaching children about suicide attacks at a training center in the Iraqi city of Mosul.

"They are just starting the training at eight years old to 18 years old. There are teenagers. There are kids (being taught) how to kill people. How to do suicide (attacks)."

Mosul, the second-largest city in Iraq, has been under IS control for two years. 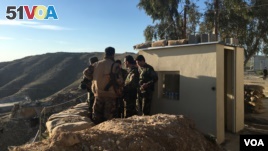 Iraqi Kurdish Peshmerga soldiers huddle around Maj. Gen. Sirwan Barzani in Makhmour, Iraq. Makhmour is expected to serve as one of the staging points for Iraqi and Peshmerga forces in the advance against the Islamic State-controlled city of Mosul, March 8. (S. Behn/VOA)

Experts say the children likely belong to families captured by IS.

One Kurdish Peshmerga counter-terrorism official says by the time these children are 12 or 13 years old, they are "trained killers." He also says the same tactics are used in Syria.

The Quilliam Foundation is a research group based in London. It studies methods to combat terrorism. It says children under IS control are trained to be spies, soldiers and suicide bombers.

The organization says children are turned into IS fighters through a long process. They are taken from their families. They are given no choice but to become soldiers, reportedly through beatings and torture.

Last year, the United Nations estimated that the Islamic State group seized over 800 Iraqi children from the area around Mosul. The U.N. said the children were taken to training camps and religious education camps.

Quilliam says the only way to fight the IS tactics is to start a program of re-education and de-radicalization for children.

Sharon Behn wrote this story for VOANews. Dan Friedell adapted it for Learning English. Mario Ritter was the editor.

What do you think about training children to be terrorists? Write to us in the Comments Section or on 51VOA.COM.

tactic –n. an action used to reach a larger goal

radicalization – n. the process of developing extreme political or social views not shared by most people