Update Required To play the media you will need to either update your browser to a recent version or update your Flash plugin.
By Ashley Thompson
03 July, 2018

American Mark Hough lives near Los Angeles, California. He was just about to start his weekend with an alcoholic drink called a margarita and a dip in his hot tub.

Then, he heard sticks breaking and leaves moving in his backyard. At first, he thought the sounds were coming from his neighbor.

But then, the noise grew louder. 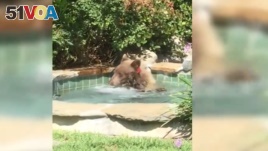 This image made from video released by Mark Hough shows a bear in a hot tub in Hough's backyard in Altadena, California.

"So I got up, looked over in the bushes and lo and behold there's a bear climbing up over my fence," Hough said.

After seeing the bear, Hough decided to go back into his home for safety reasons.

When Hough looked outside a short time later, the bear had made himself at home in Hough's backyard.

The bear had entered Hough's unheated hot tub. It played with the pool's thermometer, tossing the device in the air.

"He was playing, having a grand old time," Hough said.

Hough found his phone and began recording video of the bear's activity.

After a few minutes of pool time, the bear got out and walked slowly around the yard. Then it made its way over to Hough's margarita. The bear pushed the drink over and drank it off the ground.

Later in the day, Hough was talking to a neighbor when some tree leaves fell to the ground. Hough looked up to see the bear sleeping in the tree.

"So he had his margarita, he had his Jacuzzi, and now he's ready for an hour nap," Hough said.

Hough's video of the bear's relaxing afternoon has gone viral on social media.

One Twitter user said the bear is "clearly having a better summer than you."

Other users called the bear a "summer hero." One called it her "spirit animal."

And one local news station in Iowa suggested the bear's activities would be a great way to celebrate America's Independence Day.

"This bear has the right idea for #4thofJuly -- margaritas and swimming."

The Associated Press reported this story. Ashley Thompson adapted it for Learning English with additional materials. Mario Ritter was the editor.

dip –v. to go swimming, to get into a pool

toss - v. to throw (something) with a quick, light motion

yard –n. an outdoor area next to a house often covered by grass

spirit animal –n. an animal that you choose or that chooses you as a guide in life

nap - n. a short period of sleep especially during the day