Update Required To play the media you will need to either update your browser to a recent version or update your Flash plugin.
By Pete Musto
19 August, 2018


Participants in Girls on Rock get to explore forests, hike mountains and sleep under the stars. But that is only part of the experience the young women seek in the free Colorado-based educational program. The program also provides them the chance to carry out field research with actual scientists.

Girls on Rock is part of the organization Inspiring Girls Expeditions. The group supports similar programs in the American states of Alaska and Washington, and in the countries of Canada and Switzerland.

In late July, a team of nine girls and five instructors launched the first Girls on Rock trip. The group spent 12-days in the Gore Mountains near Frisco, Colorado.

Each girl took turns climbing a wall of rock. After climbing, the girls took a hike. During the hike, they stopped for a lesson on map reading. They also learned how to find their position on Earth using nothing but a thin rope and information about their current elevation. 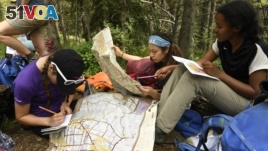 Molly Hancock, left, Yareli Herrera, middle and Taliyah Emory-Muhammad, right, learn how to read a paper map with other girls along the Gore Range Trail near Frisco, Colo. The girls are taking part in a new program called Girls on Rock. (Helen H. Richardson/The Denver Post)

The young women had several reasons for wanting to enter the program. They wanted to meet new people, be involved in science during the summer break and face fears. They were surprised by how quickly they made friends as they learned how to trust themselves and others.

Girls on Rock does not consider academic performance when choosing participants. Instead, interested girls are asked to explain in writing why they want to participate in the program.

The nine girls came from all over the U.S. Miauaxochitl Haskie, who goes by the name Mia, is a 16-year-old from New Mexico. She hopes to study at the Massachusetts Institute of Technology in the future.

Guadalupe Ramirez came from the city of Denver, Colorado. Small towns were also represented by students like 16-year-old Chloe Crocker from Fredericksburg, Texas.

Some brought outdoor experience with them, like 17-year-old Taliyah Emory-Muhammad from Silver Spring, Maryland. She rock climbs as a sport during the school year.

Eighteen-year-old Jessi Figard from North Carolina said she had never hiked before. She has Ehlers Danlos Syndrome which, in the past, kept her from similar outdoor activities.

"I've never been so dirty," Figard told the Associated Press. "This is the longest I've been without showering. It's refreshing."

Evelyn Cheng, an ecologist, and Megan Blanchard, a chemical ecologist, began developing the program in 2014. They were both studying at the University of Colorado, Boulder.

The two scientists asked for donations, applied for grants and requested help from companies to establish the program.

Now, they are seeking corporate sponsorship to keep the program going.

Blanchard said she felt she was given many opportunities and wants to give that to others.

Science and rock climbing are both majority-male fields. And Cheng said women can sometimes feel like they do not belong in those fields, as a result. She believes Girls on Rock can help make that change.

"If I had something like this early on, I would've tried so many more things, questioned so much," Cheng said.

Danika Worthington reported this story for the Associated Press. Pete Musto adapted it for VOA Learning English. Caty Weaver was the editor.

We want to hear from you. Are there similar programs for young women in your country? What are they like? Write to us in the Comments Section or on 51VOA.COM.

participant(s) – n. a person who is involved in an activity or event

hike – v. to walk a long distance especially for pleasure or exercise

elevation – n. to walk a long distance especially for pleasure or exercise

shower(ing) – v. to wash yourself by using a device that produces a spray of water for you to stand under

ecologist – n. a scientists who studies the relationships between groups of living things and their environments

grant(s) – n. an amount of money that is given to someone by a government or company to be used for a particular purpose, such as scientific research

sponsorship – n. an agreement in which a person or organization promises to give money to someone or something