Update Required To play the media you will need to either update your browser to a recent version or update your Flash plugin.
By Jim Dresbach
23 June, 2016


An airplane powered totally by the sun landed in Seville, Spain early Thursday after completing a 71-hour flight across the Atlantic Ocean.

The plane, a Solar Impulse 2 model, has just one seat. It left from John F. Kennedy International Airport in New York Monday morning.

This was the plane's 15th stop in its planned around-the-world trip. The trip began in Abu Dhabi in March of 2015.

Swiss aviator Bertrand Piccard operated the solar-powered plane on this leg of the tour. The Solar Pulse 2 had an average speed of 70 kilometers an hour during his flight. 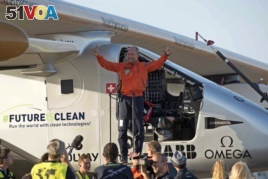 The plane's power comes from 17,000 solar cells built into the wings. The cells capture the sun's energy, which is stored in batteries on the plane.

The Solar Pulse 2 has a 72-meter wingspan. That is longer than the wingspan of a Boeing 747 passenger plane. The solar-powered plane weighs about as much as an automobile.

Piccard's friend and business partner Andre Borschberg will operate the plane on the final part of the trip. He plans to fly from Seville to Abu Dhabi in the United Arab Emirates.

cells – n. containers for holding substances that are used for producing electricity

batteries – n. devices that are placed inside a machine to supply it with electricity

wingspan – n. the distance from the tip of one wing of an airplane to the tip of the other wing