Update Required To play the media you will need to either update your browser to a recent version or update your Flash plugin.
By Jill Robbins
27 May, 2019


The active chemicals of commonly-used sunscreens end up in a wearer's blood. The U.S. Food and Drug Administration, or FDA, reported recently that the chemicals are present at much higher levels than current government health rules permit. For this reason, the researchers call for more safety studies.

From sunburn to skin cancer protection

Sunscreens were first sold to prevent sunburn and did not have to meet many government regulations. Now they are widely used to block radiation from the sun that can cause skin cancer, the most common kind of cancer in the United States.

To test some of the effects of sunscreen, researchers worked with 23 volunteers. They tested four forms of sunscreen by putting it on most of the volunteers' bodies four times a day over four days. Then, they did blood tests over seven days to find the levels of certain chemicals absorbed into the volunteers' blood.

The study looked for the chemicals from sunscreen in plasma, the watery part of blood that contains blood cells. It found four chemicals to be well above the level at which FDA guidelines call for further safety testing. They are avobenzone, oxybenzone, octocrylene and in one sunscreen, ecamsule.

The effects of plasma concentrations above the FDA's limit is not known. The research team wrote in the Journal of the American Medical Association (JAMA) that there must be more studies on how the chemicals affect humans. 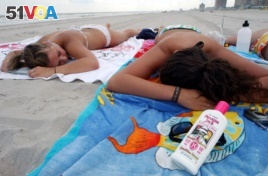 FILE - There are several sunscreen applications to choose from, sprays, dry oils, powders and even wipes. (AP File Photo/Mary Godleski)

Keep using sunscreen to protect skin from the sun

But these results do not suggest that people should stop using sunscreen to protect against the sun's harmful ultraviolet (UV) rays, researchers said.

Two researchers added their opinion in an article that followed the report. Robert Califf and Kanade Shinkai said the fact there were high levels of the chemicals in blood does not mean they are unsafe.

"The study findings raise many important questions about sunscreen and the process by which the sunscreen industry, clinicians, specialty organizations, and regulatory agencies evaluate (its) benefits and risks."

David Andrews is a senior scientist at the nonprofit health and environmental advocacy group Environmental Working Group. He called for thorough testing of sunscreen ingredients.

"For years the sunscreen chemical manufactures have resisted common sense safety testing for their ingredients and now FDA is proposing that these common ingredients must undergo additional testing to stay on the market," Andrews said.

However, the Personal Care Products Council trade association pointed out some problems with the study. They fear that people may not understand it well and could stop using sunscreen.

The volunteers in the study put on two times as much sunscreen as people usually apply in everyday use, said Alexandra Kowcz, the group's chief scientist.

Manas Mishra reported on this story for the Associated Press. Jill Robbins adapted it for Learning English. Kelly Jean Kelly was the editor.

sunscreen – n. a lotion that you put on your skin to prevent sunburn by blocking out some of the sun's rays

absorb – v. to take in (something, such as a liquid) in a natural or gradual way

clinician – n. a person (such as a doctor or nurse) who works directly with patients rather than in a laboratory or as a researcher

evaluate – v. to judge the value or condition of (someone or something) in a careful and thoughtful way

benefit – n. something that produces good or helpful results or effects or that promotes well-being

advocacy – n. the act or process of supporting a cause or proposal

ingredients – n. one of the things that are used to make a food or product

apply – v. to lay or spread on

certain – adj. known but not named

Do you use sunscreen? Do you know what chemicals it contains? We want to hear from you. Write to us in the Comments Section.