Do You Watch for the Game or the Ads?

Update Required To play the media you will need to either update your browser to a recent version or update your Flash plugin.
By Dan Friedell
06 February, 2016


Out of the eight most-watched programs in U.S. television history, only one was not the Super Bowl football game.

Can you guess which television program that was?

We'll give you the answer at the end of this story.

Back to the Super Bowl, which will be played Sunday, February 7. The number of people who watched the football game on television was larger than 100 million every year since 2010.

In the United States, watching the game with friends has become like a holiday. People gather at the home of someone with a big-screen television. Lots of food is prepared. Lots of beverages are served. People often wear shirts and hats that make them look like they are players on their favorite team. 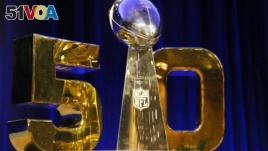 The Vince Lombardi Trophy with the Super Bowl 50 logo is displayed prior to a press conference at Moscone Center in advance of Super Bowl 50, Santa Clara, California, Feb. 5, 2016. (Matthew Emmons-USA TODAY Sports)

People who watch the game are not only interested in what happens on the field. The commercials and the halftime show are big draws. This year, the halftime performers are the British band Coldplay and singer Beyonce.

One poll conducted in 2013 found that only 28 percent of the respondents said they watch to enjoy the game. More people -- 39 percent -- of 500 people surveyed said they watched to see the commercials.

The Super Bowl is a major spectacle in the U.S. It is played in a huge sports arena where almost 70,000 fans cheer and make noise. They watch the players on the field move a ball down a grassy field, and smash into each other to stop the advance.

Media and advertising companies measure how viewers react to the advertising during the game.

Alan Siegel is a writer for USA Today. He said he thinks fans turned their attention to the ads, or commercials, 20 years ago. Some of the games in the 1990s were not very competitive, and the winner seemed to be decided early in the game.

As a result, people started paying more attention to the commercials.

USA Today measures the most popular commercials every year. Viewers can go to USA Today's website and vote for their favorites.

This year is the 50th Super Bowl game. Siegel put together a "tournament" among the 32 most-popular ads in Super Bowl history to honor the occasion.

His goal? To find out the best Super Bowl commercial ever.

Of the 32 finalists, one of USA Today's favorites featured football player "Mean" Joe Greene in 1979. He got the nickname "Mean" Joe because he was a strong player who could tackle players on the opposing teams. But in the commercial, Greene shows his soft side when he trades his football shirt, or jersey, for a bottle of Coca-Cola.

"The "Mean" Joe Greene Coke ad is widely considered the first real blockbuster, kind of famous Super Bowl ad. ... It really kind of captured the hearts of a lot of people and that sort of was the birth of Super Bowl advertising as we know it."

Apple Computer created an ad for the Macintosh in 1984 about oppression and mind control. Ridley Scott, who directed the movies "Alien" and "Blade Runner," made the commercial.

"The crazy thing about that ad, is that it only aired nationally once, and people still remember it."

Another memorable ad shows a child dressed as the Star Wars character Darth Vader. It is for the car company, Volkswagen. The boy is surprised when he uses "The Force" and his father's car starts. He does not know that his father used a remote control starter from inside his home.

"A: People love Star Wars. And B: It was cute. And C: It was clever. So, I think that ad was one of the most shared YouTube clips or shared ads of all time."

Those commercials, along with 29 others, competed in a vote. And four semifinalists emerged.

The champion turned out to be the ad featuring the horses and the puppy, called "Puppy Love."

Siegel explains why it won.

"A startling amount of memorable ads are Budweiser ads, and they've sort of mastered the art of really getting people to pay attention to what they're doing. One thing to note about those two ads is they both have animals. Especially puppies. And so people love cute animals. That ... that never fails."

Some of this year's Super Bowl commercials have been released on YouTube. One is for the food company, Heinz. It features a group of dogs called dachshunds. Dachshunds have long bodies but short legs, and are also known as wiener dogs.

Wiener is another word for hot dog, which is a popular food item at sporting events. It is a small serving of ground meat stuffed into a tube of skin served with bread.

In this year's ad, the wiener dogs are running towards people dressed in costumes to look like ketchup and mustard. The dogs are wearing hot-dog costumes to complete the joke.

Another, more serious advertisement features British actress Helen Mirren. It turns out to be another Budweiser ad. But it is not funny.

Mirren is sitting at a restaurant about to eat a cheeseburger with French fries. She has a bottle of Budweiser, too. She looks at the camera and warns people against drunken driving. She calls drunken drivers "selfish cowards."

"I do think people will remember it in a few years," Siegel says.

And now the answer to our trivia question we promised at the beginning of this story. The only television show that had more viewers than the Super Bowl?

Will you watch the Super Bowl for the ads or the game? We want to hear from you. Write to us in the Comments Section or on 51voa.com.

ad, advertisement – n. something (such as a short film or a written notice) that is shown or presented to the public to help sell a product or to make an announcement

commercial – n. an advertisement on radio or television

condiment – n.  something (such as salt, mustard, or ketchup) that is added to food to give it more flavor

cute – adj.  having a pleasing and usually youthful appearance

quarterback – n.  the player in a football game who handles the ball and is in charge of the offense

running back – n.  one of the players in a football game responsible for moving the ball forward and scoring points

trivia – n.  facts about people or events that are not well-known

respondent – n.  a person who gives an answer to a question