Update Required To play the media you will need to either update your browser to a recent version or update your Flash plugin.
By VOA
02 February, 2014

Sunday is one of the biggest days of the year for sports fans in the United States. It is Super Bowl Sunday, when the two best football teams of the year go head to head in the National Football League's yearly championship game. Steve Ember has more.

The Denver Broncos take on the Seattle Seahawks in Super Bowl 48, the first Super Bowl game to be financed by two states. The northeastern states of New York and New Jersey are jointly supporting the game at Metlife Stadium in East Rutherford, New Jersey. 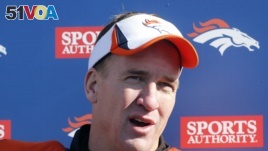 Denver Broncos quarterback Peyton Manning talks to the media Jan. 23, 2014.
This is also the first Super Bowl in history to be played outdoors in a cold weather state. Winter weather blanketed the stadium with snow this week. And, the below freezing temperatures that have hit many parts of the United States in recent days have caused more than a little concern for many football fans.

NFL officials say they have several plans in place in case of bad weather. One would mean changing the game to an earlier or later time. There are also plans to give out warmer kits to those attending the Super Bowl game. 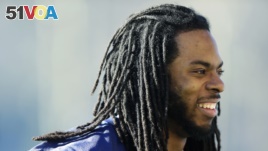 Seattle Seahawks cornerback Richard Sherman leaving football practice on January 24, 2014 near Seattle, Washington.
The Seattle Seahawks have only made one Super Bowl appearance. That was back in 2006. They lost that championship game to the Pittsburgh Steelers, with a final score of 21-10.

The Pittsburgh Steelers and the Dallas Cowboys share the top spot for the most Super Bowl appearances. Both teams have been to the Super Bowl eight times.