Superbowl Sunday: The Patriots, the Seahawks and Katy Perry, Too

Update Required To play the media you will need to either update your browser to a recent version or update your Flash plugin.
By Caty Weaver
29 January, 2015


More than 100 million Americans will be doing the same thing this Sunday. Many will break into laughter at the same time, or cry out in moments of shared emotional suffering. And everyone will eat and drink.

This event does not involve a church, mosque or temple but for many the experience is almost religious. So, have you guessed what is happening February 1 in America?

If you said the Super Bowl, you got it right!

The Super Bowl is the yearly championship game of professional American football. This year the battling teams are the Seattle Seahawks and the New England Patriots.

The Teams, The Town

It is not the first championship game for either team. In fact, the Seahawks are the defending champions. They won last year's Super Bowl for the first time. They had been to the game one other time, in 2006. 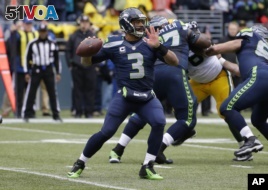 Seattle Seahawks quarterback Russell Wilson, prepares to throw in a game against the Green Bay Packers.

The Patriots have won three Super Bowls. They have been to eight. And, the team has not had a losing season, a season where it lost more games that it won, since the year 2000.

This year the Super Bowl will be played in Glendale, Arizona.

This year the game will be played in Glendale, Arizona. It is a desert area and the weather there on game day is expected to be sunny and about 27 degrees Celsius.

Watching men catch balls, run and crush each other to prevent a touchdown is not all the audience expects from a Super Bowl.

It is also famous for its halftime music show. Last year, the singer Bruno Mars performed along with the Red Hot Chili Peppers.

This year the headliner is pop singer Katy Perry.

The 30-year-old Perry spoke last week to ESPN the Magazine. She expressed excitement about her Super Bowl appearance. "I feel like I've outdreamt my dream," she said.

Katy Perry shot to fame in 2008 with hits like "I Kissed a Girl" and "Hot n Cold." Much of her music urges girls to be strong and independent like, "Roar."

Rock and roller and "Hunger Games" actor Lenny Kravitz will also perform at the show. He released his tenth studio album, "Strut," in September of last year.

The other popular entertainment provided for Super Bowl audiences are television advertisements. A 30-second commercial during the game costs a company $4.5 million this year. Who can pay those amounts? Many companies do in order to reach the largest television audience of the year.

Anheuser-Busch is a traditional buyer. The famous beer maker purchased seven 30-second spots, this year, more than any other advertiser. The ship transportation company Carnival Corporation is showing a commercial during the Super Bowl for the first time.

Most of the Super Bowl commercials are meant to make people laugh. The web company GoDaddy.com is famed for its humorous advertising. However, this year GoDaddy withdrew its planned commercial after protests from animal protection groups.

The commercial featured a puppy that was being sold online. Protesters argued that on-line sales of animals leave them at risk of abuse and worse. This week, GoDaddy announced it would air a different ad.

The National Football League owns the Super Bowl game. Last year, the league faced an angry public and protests after player Ray Rice hit his girlfriend, now wife, in the face. The incident was captured on video. The NFL suspended Rice and the Baltimore Ravens team dismissed him.

The NFL will use 30 seconds during the Super Bowl for a public service announcement to fight abuse against women and family violence.

touchdown – n. American football: a score that is made by carrying the ball over the opponent's goal line or by catching the ball while standing in the end zone

halftime – n. the period of rest between the end of the first half and the beginning of the second half in games like football and basketball

headliner – n. the main performer in a show or concert

commercial – n. an advertisement on radio or television

What are the popular sports where you live? Do people celebrate big games together with food and drink? Let us know. Post your thoughts in the comments section below.