Update Required To play the media you will need to either update your browser to a recent version or update your Flash plugin.
By Anne Ball
04 December, 2016


One day, "supercharged plants" may help feed people around the world.

Supercharged plants are ones that grow faster than normal plant life.

Scientists can speed up the growth by modifying, or changing, the structure of plants' genes. The modifications make them react quickly to changes in light.

This all has to do with photosynthesis, the process in which plants turn sunlight, carbon dioxide and water into food.

Steve Long is a plant biologist with the University of Illinois.

"Arguably, photosynthesis is the most important process on our planet. It is the driving force behind all of life." 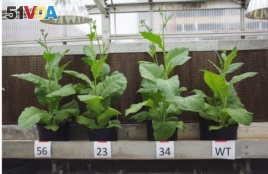 Plants grow fastest in the sun. That is when they make the most food for themselves. But their rate of growth can slow when things like clouds or trees block sunlight. But when the sun returns, it can take many minutes for growth to speed up again.

This can be a problem because it means some of our most important crop plants are not as productive as they could be.

Researchers say demand for food is expected to increase up to 70 percent by the middle of the century. They also note rising temperatures on Earth's surface. That is why they are looking for ways to improve photosynthesis and make plants more productive.

Steve Long wanted to find a way to help plants get back up to speed quickly after a period of darkness.

So he and his team added genes that shortened the recovery time. It also increased the speed at which the plants grew.

His modified plants grew up to 20 percent more than untreated ones.

"This finding, where we've just made one modification that has boosted crop yield, is really a boost to the whole area, because everyone else working on photosynthesis can now see that if we can improve photosynthetic efficiency in crops, we will get more yield."

In Long's study, his group used a form of genetic engineering called transgenics. It means taking genes from one plant, then putting them into another.

There is a scientific debate about whether transgenics is a good idea or not.

The findings were published in the journal Science.

Why is it important for plants to be efficient at making their food?

Some of our most important crop plants are ones that are not very efficient at photosynthesis.

Matthew Reynolds knows this. He is with the International Maize and Wheat Improvement Center, known as CIMMYT. Reynolds was not involved in the research. He spoke to VOA on Skype.

"Population is growing so fast, climate change is affecting negatively predictions of productivity, and so we're kind of forced to push our crops to the limit."

His group studies how plants reproduce naturally. But he says that Long's work of increasing plant growth is "a very big deal." He says the experimental use of transgenics is a start.

"A transgenic event can prove a proof of concept so we can start looking for natural variation as well."

Reynolds says the increased rates of production noted by Long's team are impressive. He has some hope about the process. But he also has questions.

"What is the downside? Why have the plants not done that before? And we always ask those questions when we see something that looks a bit too good to be true..." 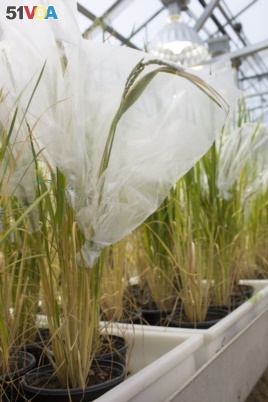 Long's group worked with tobacco plants because they are easy to study. Now they are experimenting with rice, soybeans, cowpeas, and cassava – four important food crops.

The Bill & Melinda Gates Foundation provided money for the study.

The organization says any new technology approved from this research will be made freely available to farmers in Africa and South Asia.

Steve Baragona reported on this story for VOANews. Anne Ball adapted his report for Learning English with additional information from Reuters. George Grow was the editor.

modify – v. to change some parts while not changing other parts

yield – n. the amount of something produced by a plant or farm

efficiency – n. the ability to do something or produce something without wasting materials, time or energy

transgenics – n. biotechnology that involves producing plants, animals or foods into which genes from another species have been incorporated