Supermoon Photos Around the World

Update Required To play the media you will need to either update your browser to a recent version or update your Flash plugin.
By Dan Friedell
17 October, 2016

Something called a "supermoon" rose at night on October 15 and 16.

That is when the moon is full, closer to Earth than usual, and lit by the sun. 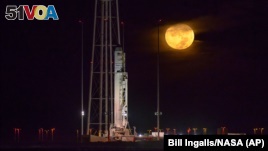 The Orbital ATK Antares rocket, with the Cygnus spacecraft onboard, sits on launch Pad-0A as the moon sets, Saturday, Oct. 15, 2016 at NASA's Wallops Flight Facility in Virginia.

NASA made a video explaining why the moon is sometimes closer to Earth than other times in its orbit.

The moon's orbit around Earth is not a perfect circle. It is shaped like an oval. The moon is about 48,000 kilometers closer to Earth on one side of its orbit than the other. A supermoon happens when the Earth is between the sun and the closer-than-usual moon.

The sun lights up the moon during the Earth's nighttime, and since it is closer than usual, it looks very large and bright.

Last weekend's supermoon was the first of three supermoons of 2016. The next supermoons will take place on November 14 and December 14. The November supermoon will be "extra super." In fact, it will be the closest full moon of the 21st century, so far. The full moon will not be that close to Earth again until the year 2034.

Many people who saw the October supermoon took pictures. Bruce Neumann took a photo in New York City of the moon above the Statue of Liberty.

NASA posted a time-lapse of the moon rising above the Antares rocket on its launch pad.

A Twitter user in Greece posted a photo of the moon rising above the Acropolis site in Athens.

Another photographer posted a photo on Twitter of Cape Town, South Africa. It shows the moon above the glowing night lights of the city.

People who saw the images reacted by posting comments. They used words like "amazing," "phenomenal" and "stunning."

Did you see the supermoon? We want to hear from you. Write to us in the Comments Section or on 51VOA.COM.

oval – adj. having the shape of an egg : shaped like a circle that is longer than it is wide

glowing – adj. having a warm color

time-lapse – adj. used to describe a way of filming something in which many photographs are taken over a long period of time and are shown quickly in a series so that a slow action (such as the opening of a flower bud) appears to happen quickly