Update Required To play the media you will need to either update your browser to a recent version or update your Flash plugin.
By VOA
25 October, 2015


Truck drivers in Cameroon are again refusing to transport food and humanitarian aid to the Central African Republic (CAR).

The drivers have been critical of the United Nations peacekeeping force in the CAR. They say the U.N. peacekeepers are not able to provide enough security for the trucks and their supplies.

Truck driver Ibrahim Soule has been waiting for weeks to bring supplies to the Central African Republic. He is waiting for guarantees from the labor union representing the drivers. 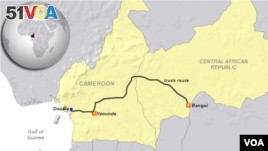 Truck drivers who were to carry aid from Douala, Cameroon to Bangui, CAR, have refused. They say it is too dangerous and risky. Children waiting to leave wartorn CAR sit inside a container truck as they wait to depart west toward Cameroon.

He says he is not ready to go to the CAR because armed men have been attacking the trucks and the U.N. peacekeepers appear to be helpless.

Arnaud Djoubaye Abazene is the country's Minister of Transport and Civil Aviation. He said that the U.N. mission in the country, known as MINUSCA, had agreed to protect them.

He says within one month they have reported two deaths, and several vehicles destroyed. He also says that food and equipment were seized, and a few drivers held hostage by armed groups.

In August, Cameroon and CAR officials met in Yaounde to plead with truck drivers to bring the goods and humanitarian aid to those in need. But the drivers have refused. The drivers said they are harassed in the CAR on the roads linking Bangui, the capital, to Douala.

Already about 18 truck drivers have been killed while transporting humanitarian aid.

Cameroon's Minister of Transport, Mebe Ngo'o, says the economies of both countries are suffering. He says he is worried about increased crowding at the Douala seaport.

He says it is a new problem that has to be carefully controlled. He says he feels very sure that Cameroon and CAR will find solutions to the new issues in the near future.

CAR depends on the Douala road transport corridor for 90 percent of imports and exports. All of the humanitarian aid and supplies for MINUSCA travel through Douala.

plead – v. to ask for something

harass –v. to annoy or bother someone