Support Grows for Osaka after She Leaves French Open

Update Required To play the media you will need to either update your browser to a recent version or update your Flash plugin.
By Jill Robbins
01 June 2021


Naomi Osaka received the support of tennis fans, leading athletes, her sponsors and her country, Japan, Tuesday, after her withdrawal from the French Open.

The world's number two female tennis player surprised the tennis world on Monday when she said she would no longer play in the tennis championship. Osaka said on Twitter that she experiences "huge waves of anxiety" before speaking to the media and she has "suffered long bouts of depression since the US Open in 2018."

The decision came after Osaka was fined $15,000 for not attending a press conference after her first-round victory. She was also threatened by the French Open and other major championships with more punishment, including suspension.

Osaka said she did not want to meet with the media to protect her mental health. Other leading tennis players argued at the time that dealing with the media was part of the job. But when she withdrew, there were many messages of support from around the world.

The head of Japan Tennis Association said in a statement Tuesday, "I wish her the earliest possible recovery." And Japan's Chief Cabinet Secretary Katsunobu Kato told reporters that he would "watch over her quietly."

There was also concern on the streets of Tokyo for Osaka who will represent Japan in this year's Olympic Games.

Tomomi Noguchi helps people wear the traditional Japanese clothing, a kimono, for photos and events. "I think she's under a lot of pressure, more than we can imagine," she told Reuters. "She got to the top when she was young so I think we can't really imagine what she's going through."

The sports business website Sportico says Osaka has made more than $55 million in the last 12 months, mainly from deals with sponsors like Nissin Foods, Nike and MasterCard. They all came out to support her decision and Nissan, the automobile company said, "We stand by her decision and wish her well." 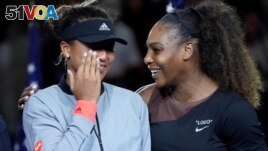 FILE - Naomi Osaka of Japan (left) cries as Serena Williams of the USA comforts her after the crowd booed during the trophy ceremony following the women's final on day thirteen of the 2018 U.S. Open tennis tournament. (Bob Deutsch/USAToday Sports/Reuters)

Support from other athletes

Osaka was an unknown when she won the 2018 U.S. Open championship over American Serena Williams. The crowd was upset with officials' calls against Williams. So, they expressed their displeasure against officials instead of cheering for the new champion.

On Monday, Williams added her support for Osaka saying, "I feel for Naomi. I feel like I wish I could give her a hug because I know what it's like. ... You just have to let her handle it the way she wants to, in the best way she thinks she can."

There were also messages of support from other female tennis champions and athletes including Olympic champion Mo Farah and NBA player Stephen Curry.

In her Twitter post, Osaka also said "the rules are quite outdated in parts." She said she is willing to work with tennis administrators to improve things for players, press and fans.

Late on Tuesday, the heads of the four major tennis championships said in a statement, "On behalf of the Grand Slams, we wish to offer Naomi Osaka our support and assistance in any way possible as she takes time away from the court." They added, "She is an exceptional athlete and we look forward to her return as soon as she deems appropriate."

Jill Robbins adapted this story for Learning English with reporting from Reuters and the Associated Press. Hai Do was the editor.

sponsor n. a person or organization that pays the cost of an activity or event (such as a radio or television program, sports event, concert, etc.) in return for the right to advertise during the activity or event

bout – n. a period of time during which someone suffers from something (such as an illness or disease) — often + of

hug – n. the action of putting your arms around someone especially as a way of showing love or friendship

handle – v. to deal with (a person or situation) successfully

cope – v. to deal with problems and difficult situations and try to come up with solutions

outdated – adj. no longer useful or acceptable; not modern or current

deem – v. to think of (someone or something) in a particular way

What do you think of the Naomi Osaka's decision to stop playing in the French Open? We want to hear from you. Write to us in the Comments Section.