Update Required To play the media you will need to either update your browser to a recent version or update your Flash plugin.
By Bryan Lynn
26 June, 2017


The U.S. Supreme Court is allowing parts of President Donald Trump's ban on travelers from six mostly Muslim countries to be enforced.

The court said Monday it will consider the case in October after its summer break. The Trump administration had requested that the ban be put in place while the case is considered in the courts.

The restrictions halted travel from Libya, Iran, Somalia, Sudan, Syria and Yemen for 90 days. It also barred all refugees from entering the United States.

The latest travel ban came about through an executive order signed by Trump. But it was blocked by lower courts. 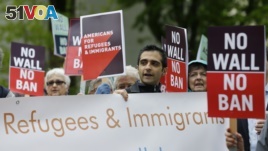 Protesters hold signs during a demonstration against President Donald Trump's revised travel ban, May 15, 2017, outside a federal courthouse in Seattle.

In its 6 to 3 ruling, the Supreme Court made an exception for one group of foreigners. It said the travel ban cannot be enforced against any "foreign nationals who have a credible claim of a bona fide relationship with a person or entity" in the U.S.

The court also said it would allow a 120-day ban on all refugees entering the United States to go into effect with the same exception.

Three of the court's conservative justices said they would have allowed the full travel bans. Justice Clarence Thomas said the government's interest in ensuring national security should outweigh any hardship to people denied entry into the U.S.

The court's decision was seen as a victory for Trump, who had repeatedly criticized federal courts for blocking his order. He has said the temporary travel ban was necessary to keep dangerous people out of the country while stronger vetting policies were created.

Trump praised Monday's Supreme Court decision, calling it a "clear victory for our national security." In a statement, he said his "number one responsibility" is to keep Americans safe.

Some immigration lawyers said the limited nature of the ban raises questions about how much impact it will have. They noted that most people coming to study, work or visit family members in the U.S. already have sufficient relationships with others already in the country.

Even though the Supreme Court is expected to hear the travel order case in October, it noted that the case could be moot at that time. This is because measures in the order are meant to be temporary, while the government reviews its security procedures.

Trump said last week the travel ban would take effect 72 hours after being cleared by courts.

A statement by the Department of Homeland Security said the order will be implemented "professionally, with clear and sufficient public notice, particularly to potentially affected travelers."

vetting – n. thorough investigation of someone or something

impact – n. major effect on something