What 'Separation Between Church and State' Means

Update Required To play the media you will need to either update your browser to a recent version or update your Flash plugin.
By Kelly Jean Kelly
27 May, 2018


One of the things the United States is known for is a separation between church and state. But those exact words do not appear in the U.S. Constitution. 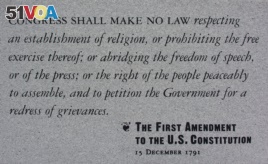 The First Amendment to the U.S. Constitution Monument in Independence National Historic Park in Philadelphia, Pennsylvania

Instead, Americans point to a line in the First Amendment that says, "Congress shall make no law respecting an establishment of religion." In other words, the U.S. government is not permitted to declare and support a national religion.

In 1971, the Supreme Court sought to clarify this idea in a case called Lemon versus Kurtzman.

Alton Lemon was a teacher in the state of Pennsylvania. David Kurtzman was a top school official there.

Lemon objected to the state giving money to teachers in Catholic schools, even though those people were teaching non-religious subjects, such as math.

Lemon objected because, in this country, taxpayers support only public schools. Parents who want their children to go to religious schools pay for that education themselves.

A majority of Supreme Court justices agreed with Lemon. But their reasoning surprised many people. The aim was not to punish religious schools. Instead, the justices wanted to protect them from government intervention. They worried that state officials could influence the teachers or the classes they taught. The price of state funding, the justices said, was just too high to pay.

clarify - v. to make something clear or clearer