Update Required To play the media you will need to either update your browser to a recent version or update your Flash plugin.
By Bryan Lynn
23 June, 2016


The U.S. Supreme Court says the University of Texas can consider race when deciding which students to admit. The case was one of the most closely watched because it deals with the issue of affirmative action.

Affirmative action is a policy designed to help those who suffer from discrimination, especially regarding employment or education.

The decision has nationwide implications because other American universities use similar affirmative action policies. However, eight U.S. states do not allow race to be used when considering public college admissions. The states are Arizona, California, Florida, Michigan, Nebraska, New Hampshire, Oklahoma and Washington.

Abigail Fisher, a white woman, filed the case against the University of Texas. She said the school denied her admission based on her race. 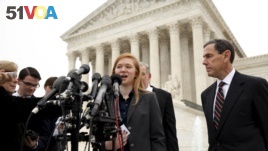 Fisher's grades were not good enough to get her automatic admission under the top 10 percent rule. She was denied admission to the University of Texas in 2008.

When she found out that minority students with lower grades than hers were accepted, she sued the school for discrimination. The University of Texas said Fisher would not have been admitted with or without race as a factor.

The university says its race-based selection policies are necessary to maintain a diverse campus community. Fisher's attorneys argued that the top 10 percent program is enough to make sure that adequate minority students are included in the admissions process.

Justice Anthony Kennedy gave the majority opinion for the court. "The university has thus met its burden of showing that the admissions policy it used... was narrowly tailored," he wrote.

Kennedy also said that "it remains an enduring challenge to our nation's education system to reconcile the pursuit of diversity with the constitutional promise of equal treatment and dignity."

Alito said he thought the decision was an example of "affirmative action gone berserk." He said he felt the university had relied "on a series of unsupported and noxious racial assumptions."

In a separate dissent, Thomas expressed his view that the U.S. Constitution makes it illegal to use race as part of the admissions process in higher education.

U.S. President Barack Obama praised the Supreme Court's decision for upholding "the basic notion that diversity is an important value in our society, and that this country should provide a high quality education to all our young people, regardless of their background."

Bryan Lynn adapted this report for Learning English based on reports from the Associated Press and Reuters. Hai Do was the editor.

We want to hear from you. Do you think race should be a part of the college admission process? Write to us in the Comments section,and visit 51VOA.COM.

factor – n. something that produces or influences a certain result

automatic – adj. happening by itself with little human involvement

diverse – adj. showing a lot of differences and variety

tailor – v. adapt for a particular purpose or person

dissent – n. the expression of opinions different from others

berserk – adj. out of control with anger or excitement