Update Required To play the media you will need to either update your browser to a recent version or update your Flash plugin.
By VOA
13 September, 2014

Delegates expressed concern about the growth of companies selling powerful Internet surveillance software. Some software programs can collect information about individuals around the world. Many of these people are private citizens.

The surveillance software industry is worth billions of dollars. Yet some experts say making laws to govern the use of such products is proving difficult. 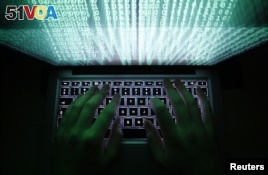 An illustration picture shows a man using a computer keyboard to enter data in Warsaw, Poland.

Gregoire Pouget is with the group Reporters Without Borders. He believes there is a need for new laws and other regulations in the industry. He says surveillance software can be used to spy on journalists, bloggers and other people who use the Internet.

Laura Tresca was the Brazilian representative of an organization called Article 19. It fights against unlawful censorship, the banning of reports or other things thought to be offensive. Ms. Tresca said Latin America is becoming a big market for the surveillance software industry. She said Brazil spent nearly $200 million on surveillance software products in the past four years. She notes that Brazilian officials said the technology was supposed to help protect the country during the 2014 World Cup competition. But, in her words, "this software was used to monitor activists to avoid protests."

Scott Busby is with the Department of State in Washington. He says the laws used to control the weapons industry also control the use of surveillance software.

"It's an issue of great concern to us, not only because some of the companies doing this are American companies. But I would point out that the issue is being addressed under the VASNA arrangement, for the non-proliferation of dangerous items. It formerly dealt with weapons, and now it's looking at surveillance technologies."

Silvia Grundmann is head of media for the Council of Europe rights group. She says European businesses are among the leaders in the surveillance software industry. She adds that finding the balance between human rights, the Internet and trade takes a lot time.

"If you go into making new regulation, new laws either on the domestic level or then on the international level, notably on the international level it takes a long period of time. And during this [period of] time journalists get surveyed, and they might even lose their lives as a result of it. So I think time is a crucial factor there; my call would be to really use existing domestic laws."

Mr. Pouget says the high cost of the software programs means only a few countries are able to buy it. But he says in only a few years, the cost of surveillance software will lower sharply. When that happens, Mr. Pouget believes large companies and even wealthy individuals will buy the software. Experts worry that increased surveillance of citizens around the world will end a person's sense of privacy.

This story was based on a report by Dorian Jones, adapted by Jonathan Evans and edited by George Grow.