Update Required To play the media you will need to either update your browser to a recent version or update your Flash plugin.
By Alice Bryant
12 August 2021


The day before he left for the United States was a busy one for Victor Cal. He went around to family members' homes to collect money so he could buy food during the long trip north.

His mother pleaded with him not to leave.

But Cal, who is 26, felt he had no choice. After a deadly mudslide, the town where he lived had only hunger and death. It seemed going to the United States was the only way out.

Eleven men from his town have gone north this year. American officials say they have stopped more than 150,000 Guatemalans at the border in 2021. That is four times the number in 2020. 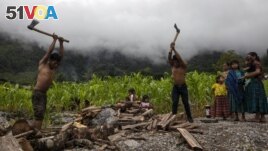 Many were like Victor Cal. They could not find work in Guatemala City.

Cal is an Indigenous Mayan who speaks Pocomchí. When the pandemic hit, he was one of thousands who left the capital to return to their farming towns in the mountains.

His father's land is in Quejá. With its coffee, corn, cardamom and beans, it sounded like a safe place. At least there would be food, he thought.

But he was wrong.

Hurricane Eta and the resulting mudslides had destroyed everything -- homes, land and the town. Cal and others became dependent on international aid organizations. They lived in a temporary settlement called Nuevo (new) Quejá.

The old Quejá was not a wealthy place. But there had been hard-earned growth over the years. The community had colorful homes with large windows and electricity. But all of that was lost to the disaster.

Esma Cal is one of the survivors. (Many of the people of Quejá share the last name of Cal, though it is not clear how some might be related.) Esma is an energetic 28-year-old and a great communicator. She became a local leader.

By January of this year, Esma Cal, Erwin Cal, Gregorio Ti and others had organized a local rebuilding council. By February, they had founded a temporary settlement on a third of their farmland.

That is how Nuevo Quejá was born. The town is home to about 1,000 survivors.

"We know how to work," said Gregorio Ti, 36. He lost his pregnant wife, two young sons and his mother in the mudslide. His daughters, 11 and 14 years old, survived.

The work never ends and is backbreaking. All day long, men, women and children cut and transport wood and clear land with their tools.

The temporary shelters have holes in their tops that let rainwater pour inside.

But because the town does not officially exist, it cannot get electric poles or road repairs or cleaner water. The Guatemalan government has never been much help to this community. And after the mudslide, it declared the new settlement unlivable.

The townspeople have gotten some help from aid organizations.

For example, UNICEF donated a new school to the community. But the school has been closed for about five months because UNICEF gave the key to a teacher who left.

So instead, classes took place in the shelter next door. The structure leaks, and the floor is often flooded and muddy. The school serves 250 children and the materials are in Spanish. The students speak only Pocomchi.

In addition, the children have begun suffering from poor nutrition.

César Chiquin is the head nurse in charge of the area. He said before the hurricane, the children were healthier. "Today, it is rare for a child to have the correct weight and height," Chiquin said.

The people of Nuevo Quejá are unable to grow and raise enough food. Part of the issue is timing. After losing last year's crops to the hurricanes, "We arrived in Nuevo Quejá too late for planting properly," Esma Cal said.

They also have much less land than they did before the storms. And a lot of the fertile soil was washed away by the rains.

The rebuilding council says the town needs about 30 hectares more land. But the council has no money to buy it. Someday, the community could be awarded land by the government. But Guatemalan law says the land does not have to be close by. And the community does not want to move far from their Indigenous lands.

"We need a permanent solution. This place is not fit to live in," said Esma Cal. "We, as a farming community, need land."

The people of Nuevo Quejá also need wood for their stoves. So they cut down trees on the mountainside. They understand this puts them at risk for mudslides as the rainy season comes.

"We know we can't be here," Julio Cal said. "The government has to relocate us on permanent land."

But until then, people are dying in this settlement, one by one.

Moving to Guatemala City was not possible for Victor Cal. There were no jobs in the pandemic, and Mayans like him do not speak Spanish.

Most of them say the only thing that prevents them from emigrating is the cost.

Víctor Cal was able to get a $13,000 loan from a family member in Miami to buy coyote services. A coyote in this situation is someone who brings immigrants across the U.S. border secretly.

It was four in the morning when Victor wrote down two telephone numbers: his and that of his coyote. He put the paper on the table for his parents.

After he left, he said, "If I had a choice, I wouldn't go. I will be back as soon as possible."

mudslide – n. a large mass of wet earth that suddenly and quickly moves down the side of a mountain or hill

Indigenous – adj. of the people who are native to a place

council – n. a group of people who are chosen to make rules, laws, or decisions about something

key – n. a device that is used to open a lock or start an automobile

nurse – n. a person who is trained to care for sick or injured people and who usually works in a hospital or doctor's office

relocate – v. to move to a new place