Suspect in Berlin Truck Attack Shot by Police in Italy

Update Required To play the media you will need to either update your browser to a recent version or update your Flash plugin.
By Bryan Lynn
23 December, 2016


The suspected driver in the deadly truck attack at a Christmas market in Germany was shot and killed Friday by police in Italy.

The 24-year-old Tunisian man, Anis Amri, was killed during a shootout with two police officers in Milan. Amri pulled out a gun and shot one officer in the arm after he was asked to show identification papers during a normal patrol.

German officials said they had confirmed through fingerprints that the man killed in Milan was the suspect in Monday's truck attack. Amri is suspected of hijacking the truck and killing its driver before driving into a Christmas market in central Berlin. 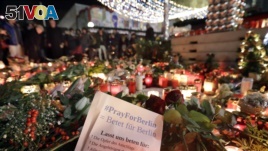 People stay in front of candles close to a Christmas market beside the Kaiser Wilhelm memorial church in Berlin, Germany, Dec. 21, 2016, two days after a truck ran into a crowded Christmas market there, killed several people and injuring dozens.

The attack killed 12 people and injured more than 50 others.

Police said they found documents belonging to Amri inside the truck.

Before Amri was identified as the main suspect, police detained a Pakistani man for possible involvement in the attack. He was later cleared and released.

Germany's head prosecutor told reporters the investigation is continuing. He added that it is not yet known whether other suspects might have helped carry out the attack.

The Islamic State (IS) said the attacker was inspired by its call for people to strike members of a coalition fighting the militant group in Syria and Iraq.

In a video posted by IS's Amaq news agency, Amri pledged his allegiance to Islamic State leader Abu Bakr al-Baghdadi. He also urged others to carry out attacks on "Crusaders who are striking Muslims daily." He added: "I swear to God that we will come to slaughter you, you pigs."

Officials say Amri arrived in Germany in July 2015, after serving time in jail in Italy for setting fire to a refugee shelter. He sought asylum in Germany but the request was denied. Authorities said he could not be sent back to Tunisia because he had no passport and that country had refused to accept him.

German Chancellor Angela Merkel has ordered an investigation into the policies that resulted in Amri staying in the country so long. Merkel is facing increasing political pressure in Germany to take a stronger position on immigration and asylum policies. Her popularity has dropped since Germany opened its border to accept about one million refugees.

Bryan Lynn wrote this story for VOA Learning English, with material from VOA News, the Associated Press and Reuters. Ashley Thompson was the editor.

patrol – n. the act of walking or going around or through an area, building, etc., in order to make sure that it is safe

prosecutor – n. lawyer who press the government's case against someone accused of a crime

slaughter – v. to kill a lot of people in a violent way