Update Required To play the media you will need to either update your browser to a recent version or update your Flash plugin.
By Bryan Lynn
19 September, 2016


The suspect in two bombings Saturday in New York City and New Jersey has been captured after being wounded in a gun battle with police.

The 28-year-old suspect was identified as Ahmad Khan Rahami, a naturalized U.S. citizen from Afghanistan. News video showed Rahami being placed into an ambulance Monday in the New Jersey town of Linden, about 32 kilometers from New York City.

The suspect's arm was bloody and bandaged and officials said he underwent surgery for a gunshot wound to the leg. Local officials said two police officers were also injured during the operation.

The Federal Bureau of Investigation said Rahami was wanted for questioning in an explosion Saturday evening in the Chelsea area of New York City that wounded 29 people. The explosion went off in or near a trash container in a busy area of the neighborhood. The blast sent glass and debris flying into the air. All 29 people wounded were treated and released from the hospital. 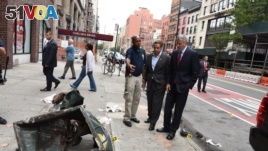 Rahami is also a suspect in another bombing that happened hours earlier in Seaside Park, New Jersey, about 135 kilometers south of New York City. Police said a pipe bomb exploded before the start of a charity race to help U.S. Marines. No one was wounded.

Possible links to other devices

The FBI and New York police have also been searching for possible links between the Chelsea bombing and another explosive device found a few blocks away that did not go off. That bomb was recovered shortly after the first one exploded. Police safely removed it from the area and set it off in a controlled explosion.

Also, five explosive devices were discovered Sunday in a trash can at a train station in Elizabeth, New Jersey, just outside New York City. One of the devices exploded while a bomb squad robot tried to disarm it, but no one was hurt.

The bombings happened as leaders from around the world were gathering in New York City for the United Nations General Assembly. A U.N. spokesman told VOA that officials evaluate the security needs each day inside the U.N. complex.

Bryan Lynn wrote this story VOA Learning English, based on reports from VOA News, the Associated Press and Reuters. Mario Ritter was the editor.

bandage – n. a piece of cloth put on injured parts of the body

debris – n. pieces left over after something has been destroyed

pipe bomb – n. – a homemade bomb made with a pipe to hold explosives

evaluate – v. to consider or study something carefully