Update Required To play the media you will need to either update your browser to a recent version or update your Flash plugin.
By Christopher Jones-Cruise
27 March, 2016


A girl who may have been planning a suicide bombing in Cameroon said she is one of the Chibok girls kidnapped in 2014.

They arrested one of the girls before she could blow herself up. A second girl surrendered and the third ran back to Nigeria. The girl who surrendered said she was one of the Chibok girls. 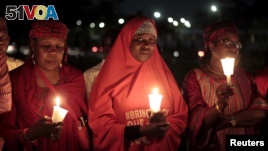 Bring Back Our Girls campaigners gather at a candlelight ceremony in Abuja marking the 500th day since the abduction of girls in Chibok, Nigeria, Aug. 27, 2015.

The 15-year-old girl looked tired and in need of food. She could not tell them more about her time in captivity or how she and the other girls were treated.

In 2014, the terror group Boko Haram kidnapped 270 girls from a Nigerian school in Chibok. Experts believe they were taken to the Sambisa forest, an area the group controls.

People around the world protested the kidnapping. An international campaign called "Bring Back Our Girls" was launched. About 50 of the girls later escaped. Nigerian officials still do not know where the remaining Chibok girls are.

Midjiyawa Bakari is the governor of the northern part of Cameroon. He asked investigators to find out if what the girls said is true.

Bakari said the terrorist group has changed the way it operates. The group has been using teenaged girls to carry out suicide bombings in Cameroon and in Nigeria.

Correspondent Ayaz Gul reported this story from Islamabad. Christopher Jones-Cruise adapted it into VOA Learning English. Hai Do was the editor.

captivity – n. the state of being kept in a place (such as a prison or a cage) and not being able to leave or be free; the state or condition of being captive