Update Required To play the media you will need to either update your browser to a recent version or update your Flash plugin.
By Bryan Lynn
29 March, 2019

Trump's talks with North Korean Leader Kim Jong Un in Singapore led to an agreement in which the two nations promised to keep working on several issues aimed at improving relations.

Trump and Kim held another face-to-face meeting last month in Vietnam. That meeting produced no major agreements. At both meetings, the leaders reportedly considered a proposal to open a liaison office in North Korea's capital Pyongyang.

Such offices are one step below an embassy. They are often set up between nations that do not have official diplomatic relations. They offer a way for two nations that have tense relations to continue some kind of working contact. The U.S. has operated "interest sections" in places like Cuba and Iran. 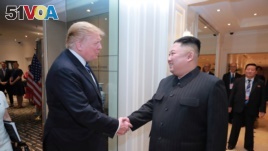 South Korea set up a liaison office in the North Korean city of Kaesong last year after several months of increased discussions and contacts with the North.

If the U.S. and North Korea decide to open a liaison office, Sweden says it will make a room available for that purpose. The room sits next to the Swedish ambassador's office in Pyongyang's diplomatic area.

The room has remained mostly unused for more than 20 years. But it was once used as an office to handle U.S.-North Korean matters. The office was set up after an agreement signed in 1995 that gave Sweden permission to serve as America's "protective power" in North Korea.

At the time, there were a lot of talks going on between U.S. and North Korean officials. The office was meant to serve as a base for necessary contacts because the U.S. had no diplomatic relations with the North.

Entering the room today, reports say there is evidence of the changing relationship of the two sides over the years. Two versions of the Pyongyang Times newspaper are on display. One reports on warming relations under North Korea's late leader Kim Jong Il and U.S. President Bill Clinton during the 1990s. A more recent issue of the newspaper shows a photo of Trump and Kim Jong Un on its front page.

Trump and Kim were asked by reporters about the possibility of opening a liaison office during their meeting last month in Hanoi, Vietnam. "It's actually not a bad idea," Trump said. Kim answered through an interpreter, saying "I think that is something that could be welcomed."

Sweden permitted a reporter from the Associated Press to see the room set aside for possible U.S. use. The reporter, however, was not permitted to take pictures for security reasons. One diplomat told the AP the office could be used as an interest section for the U.S. This would be one step below a liaison office.

The Swedish Embassy in Pyongyang, along with the British Embassy, sits on the property of the German Embassy. Diplomats said, if the U.S. does decide to set up a liaison office, Sweden would no longer be responsible for U.S. interests in North Korea under the current agreement.

The Associated Press reported on this story. Bryan Lynn adapted the report for VOA Learning English. Mario Ritter Jr. was the editor.

liaison – n. relationship that allows different organizations or groups to work together and provide information to each other

section – n. a part something is divided into

display – n. something shown for people to look at

interpreter – n. someone whose job is to change what someone else in saying into another language

property – n. a building or piece of land