Update Required To play the media you will need to either update your browser to a recent version or update your Flash plugin.
By Susan Shand
11 September, 2018


Sweden, home of the Nobel Prize, is facing political problems.

The two main political alliances failed to win a clear governing majority in elections on Sunday.

The ruling coalition, representing the Social Democrats, Greens and the Left Party, won the most votes. The opposition center-right Alliance finished in second place. Each side received a little more than 40 percent of the vote.

The Sweden Democrats, a party with ties to white extremists, finished in third place. It won 17.6 percent of the votes. That was up from 13 percent in the 2014 elections. 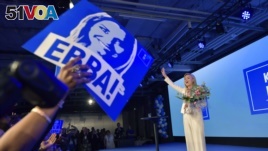 The Sweden Democrats gained because of voters' concerns about the hundreds of thousands of immigrants who moved to the country in recent years. The party wants Sweden to leave the European Union.

The Sweden Democrats have been working to change the party's image as a movement working in support of Nazi policies. The Nazi party ruled Germany in the years leading up to and including World War II.

Prime Minister predicts he will stay in office

After the vote on Sunday, Swedish Prime Minister Stefan Lofve has said he will stay in his position. His party – the Social Democrats -- won the largest number of votes. Lofve has led the government since 2014.

"I believe that it must be the largest party in Sweden that forms a government. Historically, it has been always been this way in Sweden," he said. "The main parties will try to form a government which could "takes week, months." The Swedish news agency TT reported his comments.

The Sweden Democrats have said they could not be ignored in coalition negotiations and have promised to use their influence.

"This party has increased...everything is about us," its leader Jimmie Akesson said, on election night. "I am ready to talk with others."

Lofven told his supporters the election presented "a situation that all responsible parties must deal with," adding that "a party with roots in Nazism" would "never ever offer anything responsible, but hatred."

"We have a moral responsibility. We must gather all forces for good," he said.

Effect of migration on Swedish politics

Sweden has been militarily neutral for nearly 200 years. It has been known for its usually open doors to migrants and refugees. The election on Sunday was the first since Sweden's 10 million population accepted a record 163,000 refugees in 2015. That is the highest per capita of any European country.

That had followed the earlier arrival of hundreds of thousands of asylum seekers.

Since 2015, Sweden's government has sharply restricted immigration. But many Swedes say their country cannot deal with so many newcomers, many of them Muslims from Africa and the Middle East.

The growing strength of the Sweden Democrats also show how old ways of thinking are collapsing.

Only a few years ago, Swedes would be denounced as racist for suggesting the country had limits on how many migrants it should take. They also would be criticized for expressing the belief that it is difficult to integrate Africans and Arabs in Swedish society. But people increasingly are expressing such ideas more freely, adding to the support of the Sweden Democrats.

The Associated Press reported this story. Susan Shand adapted the AP report for Learning English. The editor was George Grow.

per capita – adj. by or for each person

integrate – v. to unite with something else

migrant – n. someone who moves from place to place, usually for economic reasons