Update Required To play the media you will need to either update your browser to a recent version or update your Flash plugin.
By Dan Friedell
19 January 2023


Sweden's government has promised to remove the "red tape" that restricts dance in some public places.

It recently considered a 10-year-old legal requirement for restaurants, bars, and clubs to get a government permit to offer dancing at such businesses. The permit costs about $67.

A restaurant, bar, or club that permitted dancing without possession of such a document could lose its right to do business. 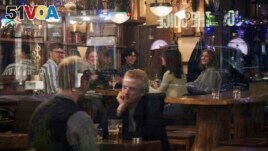 FILE - People sit in a bar in Stockholm, Sweden, on March 25, 2020. Sweden wants to cut red tape when it comes to dancing. (AP Photo/David Keyton, File)

But a new government proposal says businesses will only need to register with local police in order to permit dancing. No payment is necessary under the proposal.

Gunnar Strommer is Sweden's Justice Minister. He said "it is not reasonable for the state to regulate people's dance."

He said the proposal would reduce "bureaucracy and costs" for businesspeople and those who organize dances.

Swedish media welcomed the proposed plan. The proposal requires parliamentary approval. If lawmakers pass it, the new rule will go into effect July 1.

red tape –n. a series of tasks usually enforced by the government that feel unnecessary

bar –n. a place where people to go to drink alcohol

club –n. a place where people go to dance and drink

regulation –n. rules usually made by a government or leadership group

bureaucracy –n. a system of government or business that has many complicated rules and ways of doing things