Update Required To play the media you will need to either update your browser to a recent version or update your Flash plugin.
By Jill Robbins
03 October 2022


Swedish scientist Svante Paabo won the Nobel Prize in medicine on Monday for his discoveries on human evolution. His work shows how our immune system works differently from our long-ago ancestors, the Nobel group said.

Paabo has led the development of new methods that permit researchers to compare the genes of modern humans, also known as Homo sapiens, and that of some human relatives, like the Neanderthals and Denisovans. 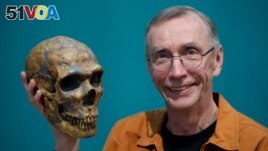 Swedish scientist Svante Paabo, with a replica of a Neanderthal skeleton in Leipzig, Germany, on Oct. 3, 2022, won the 2022 Nobel Prize in Physiology or Medicine for his discoveries on human evolution. (AP Photo/Matthias Schrader)

Scientists first found Neanderthal bones in the mid-19th century. But looking at their genetic code, or DNA, helps them fully understand the links between species. Paabo studies the time when modern humans and Neanderthals went separate ways as a species. That was around 800,000 years ago.

Anna Wedell is chair of the Nobel Committee. She said, "Paabo and his team also surprisingly found that gene flow had occurred from Neanderthals to Homo sapiens, demonstrating that they had children together during periods of co-existence."

This movement of genes between ancient human species affects how the immune system of modern humans reacts to infections, such as the coronavirus. People outside Africa have 1-2 percent of Neanderthal genes.

Discovery of a new human species

Paabo and his team also recovered some DNA from a tiny finger bone found in a cave in Siberia. This led to the recognition of a new species of ancient humans they called Denisovans.

Wedell described this as "a sensational discovery." With that information, researchers showed Neanderthals and Denisovans to be related groups. They split from each other around 600,000 years ago. Denisovan genes have been found in up to 6 percent of modern humans in Asia and Southeast Asia.

"By mixing with them after migrating out of Africa, Homo sapiens picked up sequences that improved their chances to survive in their new environments," said Wedell. For example, Tibetans share a gene with Denisovans that helps them live in high mountain areas.

Nils-Goran Larsson is a Nobel Assembly member. He told the Associated Press, "Svante Paabo has discovered the genetic makeup of our closest relatives. And the small differences between these extinct human forms and us as humans today will provide important insight into our body functions and how our brain has developed and so forth."

Paabo was surprised to learn of his win on Monday. He thought something had been broken in his summer house when he got the call from the Nobel committee.

Father and son both Nobel winners

Paabo, 67, did his work at the University of Munich and at the Max Planck Institute for Evolutionary Anthropology in Leipzig, Germany. Paabo is the son of Sune Bergstrom, who won the Nobel prize in medicine in 1982. The Nobel Foundation says this is the eighth time that the son or daughter of a Nobel prizewinner also won a Nobel Prize.

David Reich is a geneticist at Harvard Medical School. He said by recognizing that DNA can be preserved for tens of thousands of years — and developing ways to recover it — Paabo and his team created a completely new way to answer questions about our past. Their work, he added, led to "explosive growth" of ancient DNA studies.

Katerina Harvati-Papatheodorou is a professor of paleoanthropology at the University of Tübingen in Germany. She said the award draws attention to the importance of understanding human evolution to gain insights about human health, such as COVID infections, today.

The medicine prize begins a week of Nobel Prize announcements. The prizes carry a cash award of nearly $900,000.

David Keyton, Frank Jordans and Laura Ungar reported on this story for the Associated Press. Jill Robbins adapted it for Learning English.

evolution – n. a process of gradual change that takes place over many generations, during which species of animals, plants, or insects slowly change some of their physical characteristics

species – n. class of plants or animals whose members have the same main characteristics and are able to breed with each other.

sensational adj. so remarkable that it causes great excitement and interest.

sequence - n. a DNA sequence is the order in which the elements making up a particular gene are combined