Update Required To play the media you will need to either update your browser to a recent version or update your Flash plugin.
By Hai Do
21 January 2023


Asian families from the United States to China and Vietnam celebrate the Lunar New Year on Sunday, January 22.

There are new clothes, big meals, and the traditional red envelopes of money for children. The red signifies good luck. There are also plenty of tasty, sweet desserts to have with tea throughout the day. 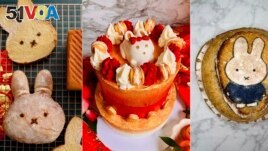 This combination of image shows, from left, milk bread, a two-level cake and a sourdough boule with an image of Miffy. (Kat Lieu via AP, left, Karen Chin via AP, center and Kelson Herman via AP)

In Beijing, China, people have been lining up outside Daoxiangcun, one of the city's best-known bakeries, for New Year dessert gifts. Some of the treats are shaped like a rabbit, the Chinese zodiac animal of honor for 2023.

In central China's Shanxi province, Lexi Li waited for seven hours in the cold weather to buy baked goods. Li told the Associated Press, "I don't really like desserts and pastries, but I just want to bring something home as a gift."

The most popular dessert is nian gao, made from rice flour along with taro, date fruit, jujube and red bean paste. Nian gao sounds like "higher year" in Chinese, meaning a more successful year ahead. It also expresses wishes for children to grow taller.

Siu Yan Ho is a Hong Kong-based expert in Chinese food culture. Siu said, "Food is memory, and this memory is connected with festivals."

Vietnam is celebrating the Year of the Cat. The traditional sweets for such celebration differ by area. Vietnamese people eat nian gao, which they call banh to. They also eat che kho gao nep, a pudding made with sticky rice and a mixture of water, ginger and either sugar or molasses. Other treats include che kho dau xanh — a bean pudding made with coconut milk and sugar — and banh tet chuoi, a rice cake with bananas.

"On Lunar New Year, for three days you go visit family, friends and teachers," said Linh Trinh, a Vietnamese food historian studying at the University of Michigan. "So everybody has to store a lot of snacks in their house for people to come visit and have tea. It becomes like the pride of the household to serve their traditional snacks."

Kat Lieu, who is half Chinese and half Vietnamese, now lives in Seattle, Washington. She remembers that her mother would make steamed nian gao for breakfast every Lunar New Year. Lieu plans to do the same this year for her nine-year-old son.

"I'm also going to make the steamed nian gao and things like that, and try to have him appreciate it more, too," she said.

Kelson Herman lives in San Francisco, California. She made bread for the Lunar New Year. She topped the bread with an image of a Miffy, a famous rabbit from a Dutch children's book.

In Queens, New York, Karen Chin made a two-level cake frosted in coconut buttercream topped with a white chocolate rabbit. "I told my grandma that I was going to make a cake. And she's like, ‘Don't make it too complicated,'" Chin said, smiling.

Terry Tang wrote this story for the Associated Press. Hai Do adapted the story for Learning English.

envelope - n. an enclosing cover for letter, card or money

bakery - n. place where bread, cake or cookies are made

festival - n. special time when people get together to celebrate

appreciate - v. to understand the importance of something

complicated - adj. having many parts