Update Required To play the media you will need to either update your browser to a recent version or update your Flash plugin.
By VOA
17 June, 2015


Swiss officials are investigating possible money laundering incidents connected to the planning of the 2018 and 2022 FIFA World Cup events. The officials now say there are 53 suspicious actions.

FIFA is the governing group for professional football, or soccer.

Swiss attorney-general Michael Lauber said Wednesday that banks reported the incidents. He said the case was "huge and complex." 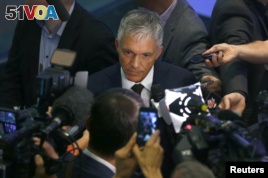 US military leaders: stronger Iraq critical to IS fight

U.S. Secretary of Defense Ash Carter spoke about Iraq to members of the House of Representatives Wednesday. He told the lawmakers that building a stronger Iraqi government is the most important defense against Islamic State militants.

Mr. Carter said the United States is seeking a "greater commitment" from Iraq, especially in getting enough soldiers to fight against the Islamic State group.

He spoke to the House Armed Services Committee. He said the U.S.-led air campaign against Islamic State in Iraq requires "legitimate local ground troops to seize, clear and hold" land.

Debate on voting rights in Hong Kong started Wednesday in a legislative meeting on the proposed electoral reform.

Thousands of demonstrators for and against the proposed change gathered outside of city government offices.

More than 100,000 demonstrators have been pressing for Hong Kong to have an open election for the city's top leader, the chief executive.

China instead offered a plan that permits voters to choose among candidates approved by a government group. In the past, the chief executive has been elected by a 1200-member, mostly pro-Beijing committee. Legislators are expected to vote on the reform plan by Friday.

165 pardoned in Egypt ahead of Ramadan

The Islamic holy month of Ramadan begins Thursday. Pardons during national and religious holidays are common in Egypt.

President Sissi's pardons included many university students. Some were jailed under a law that severely punishes protesters at demonstrations that do not have police permits.

permit – n. an official document that shows that a person is allowed to do or have something