Update Required To play the media you will need to either update your browser to a recent version or update your Flash plugin.
By VOA
25 August, 2014


Syrian Foreign Minister Walid al-Moallem says his nation is willing to work with the international community in the fight against Islamic State militants. He also appealed to others to end their support for the militants. The official spoke Monday; the day after Syria lost a major airbase in the northern Raqqa province.

Mr. Moallem said, "My government is ready to cooperate and coordinate both regionally and internationally to fight terrorism."

He said that the Islamic State militants and Jabhat al-Nusrat, another jihadist group, are more dangerous than the Taliban or al-Qaida. The two groups have fought against the U.S. and its NATO allies since 2001

But, Mr. Moallem warned against U.S. airstrikes in Syria. He said any action in Syria must be approved by Syria. He warned that Syria could attempt to shoot down U.S. warplanes that take action without approval. The Syrian foreign minister also accused both Qatar and Turkey of supporting the militants. 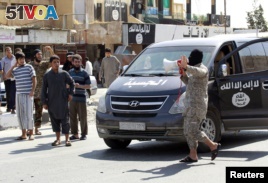 Russian Foreign Minister Sergei Lavrov told reporters he had not heard about the border crossing. He said "there is plenty of misinformation" about invasions.

Mourners sang, clapped and danced on Monday at funeral services for Michael Brown. A white police officer shot and killed the unarmed teen August eleventh. His death led to several days of protests in Ferguson, Missouri. Some were violent.

Brown's father appealed for calm before the funeral. He said, "All I want is peace while my son is laid to rest. Please, please. I'd like a day of silence so we can lay our son to rest. Please. That's all I ask. And, thank you."

The army general who led the May 22nd overthrow in Thailand has officially taken office as prime minister.

General Prayuth Chan-ocha bowed before a large photograph of King Bhumibol Adulyadej after an order from the King was read. The order inaugurated the general as Thailand's 29th prime minister.

Israeli airstrikes killed eight more people in Gaza on Monday. It was the 49th day of the conflict in Gaza. The Israeli army said Hamas militants fired 80 rockets across the border into Israel. No one was hurt in those attacks.

community – n. a group of people living together in one place or area

overthrow – v. to remove from power; to defeat or end by force

hurt – v. to cause pain, injury or damage