Syrian Bombings Have a Human Cost

Update Required To play the media you will need to either update your browser to a recent version or update your Flash plugin.
By VOA
09 October, 2015


As the conflict in Syria continues, rights groups are documenting the human cost of cheap explosives.

The Syrian Network for Human Rights says Syrian army helicopters dropped more than 1,700 barrel bombs last month. Those attacks are said to have killed at least 103 people, including 25 children and 15 women. But statistics like that do not tell everything about the bombing.

Thirteen-year-old Ahmed and eleven-year-old Nizar both survived barrel bomb attacks. The force from the explosions nearly crushed them. They suffered severe injuries. But they are alive and learning to deal with their injuries. 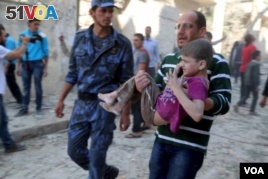 A child injured in a bombing in Syria is rushed to medical help.

Ahmed is partially paralyzed, unable to move anything below his chest. He has only recently started to use his hands and arms. But the rest of his body will most likely never be able to move again.

Others were unable to cheer up Ahmed when he arrived at a post-operative field hospital in the Turkish border town of Kilis. The boy had just learned that his father and sister died in an explosion in Aleppo.

Ali Ahmed is a medical worker.

"He was very aggressive, he was very angry and without any movement in the forearms and his legs. After some treatment ...he is moving his hands now. And now you see him. Now he is optimistic. But I think he is frightened to think in the future and the past."

Ahmed now can smile and show how he is able to use his hands to hold his one-year-old brother by his bedside. Ahmed's mother explains that he can now play video games on a tablet computer. Ahmed gives a thumbs-up, a sign that he is feeling better. It has taken him weeks to be able to do the simple movement. It is the result of his strength and the work of the Syrian refugee doctors. The doctors work in a 47-bed hospital operated by the International Blue Crescent.

The Syrian Network for Human Rights reported this week on the Syrian government's use of barrel bombs. First used in August 2012, they are simple devices: oil drums or other containers filled with the explosive TNT and pieces of metal. Barrel bombs also can contain fuel or even harmful gases.

The United Nations Security Council condemned the use of barrel bombs in February 2014. The Syrian Network for Human Rights says almost 9,000 people have been killed in barrel bomb attacks since the U.N. resolution was passed. The group says 95 percent of those killed were civilians. About one-third were children.

Nizar also was hurt in a barrel bomb explosion. Nizar grew up in the Syrian city of Homs. The 11-year-old says he was playing outside with other children when they heard an explosion. He ran into a building but was caught in a second explosion. Nizar lost his right arm and his left was hurt badly in the explosion.

Doctors at the hospital are numbed by the tragedies and wonder why, after four years, more has not been done in Syria.

The conflict continues. Reporters say Islamic State militants want civilians to leave the town of Raqqa. The town is, reports say, faced with deadly bombing from Russian warplanes. Islamic State commanders have been preparing the town for a possible attack. The actions have put additional pressure on civilians there.

Jamie Dettmer reported this story for VOA news. Mario Ritter adapted it for Learning English. George Grow was the editor.

cheap – adj. not costing a lot of money; low-cost

statistics – n. numbers that represent information related to how often something is done, cost or other information about people or things

paralyzed – adj. being unable to move or feel all or parts of the body

numbed – adj. unable to feel or react normally because of shock