Update Required To play the media you will need to either update your browser to a recent version or update your Flash plugin.
By Christopher Jones-Cruise
20 October, 2016


Rami Adham was deeply troubled by television reports he saw about children in his former home of Aleppo, Syria.

The reports said Syrian government attacks were terrorizing the children.

He wanted to help them. 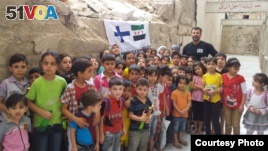 Rami Adham is surrounded by Syrian children who gather near a field school in Aleppo that has since been destroyed, Sept. 2015. (photo courtesy of Rami Adham)

Adham now lives in Finland with his six children. He told VOA that he used money he had saved to buy toys to bring to Syria. He also gathered some of his own children's toys.

He began smuggling toys into the city in 2012. The trips were very dangerous.

The 43-year-old has traveled more than 28 times to the city he left 27 years ago. He estimates he has brought about 20,000 toys to the city.

He spent about two weeks in Aleppo in September. He brought toys donated by people throughout the world. He also brought some food and medicine.

He and other volunteers carry the goods in cloth bags on their backs. On most trips, he can bring about 80 kilograms of goods into Aleppo.

The trips to Aleppo begin with a flight from Helsinki to Turkey.

Adham then walks across the border into Syria. These crossings are illegal. Only aid workers are permitted to cross from Turkey into Syria.

He says he has faced serious threats to his life. But, people in Syria help him.

He says early this year he was trapped in a place during a bombing raid. Adham was badly wounded. Health care workers treated him at a small hospital in Aleppo. He had a broken arm and had shrapnel in his back and neck. He was later sent to Turkey for treatment.

Adham leads a non-profit group that receives toys from throughout Europe. The group also helps 400 children in Syria whose parents have died. And it operates three schools in refugee camps near Aleppo that are controlled by rebels. He says the group helps educate more than 2,000 Syrian children.

He says his group began with his friends and neighbors in Finland. It has now expanded to other cities in Finland and to other countries.

He says the Syrian civil war has killed, wounded or displaced hundreds of thousands of children.

Justin Forsyth is an official of UNICEF, the United Nations Children's Fund. He recently described the children of Aleppo as "trapped in a living nightmare. There are no words left to describe the suffering they are experiencing," he said.

Recently, the top UN official trying to end the civil war warned that rebel-held eastern Aleppo could be destroyed by the end of the year.

Staffan de Mistura said if Syrian and Russian airstrikes on the city continue, "thousands of Syrian civilians, not terrorists, will be killed and many of them wounded."

Experts estimate there are as many as 100,000 children among the 250,000 people trapped in rebel-held areas of Aleppo.

shrapnel – n. small metal pieces that scatter outwards from an exploding bomb, shell or mine

nightmare – n. a very bad or frightening experience or situation

toy - n. a plaything for children

bag - n. something used to carrying objects such as personal belongings