Update Required To play the media you will need to either update your browser to a recent version or update your Flash plugin.
By Dan Friedell
27 December 2021


Twenty-nine-year-old Bushra started her trip to Europe from Erbil, Iraq in late September.

The Syrian and ethnic Kurd was a student at the university in Deir el-Zour when the civil war started in her country in 2011.

She moved to another university in Syria when Islamic State fighters took control of areas near her. She still did not feel safe. During one two-year period, she did not leave home often. 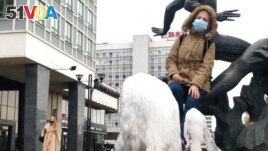 Syrian Kurd Bushra, who only gave her first name, poses for a photograph in Minsk, Belarus, Sept. 22, 2021. (Bushra via AP)

She got work with an international aid group. During that time, she saved all her money so she would be able to leave and go to Europe.

Ten years after the war started in her country, she began her trip.

Bushra left because the economy was not good in Syria. For example, her father's job paid about $100 a month at the start of the war. Today, the same amount of money is only worth about $15. The minimum wage in Syria can only buy about 2.3 kilograms of meat a month. Some months, people cannot get that much because it is not available.

She left because she feared Islamic State fighters who recently carried out eight kidnappings in a town close to where she lived.

Her parents worried about a woman in her 20s making a long trip by herself. But in the end, they agreed she should leave and try to find a better life in Europe. Bushra said she had no future in Syria.

She recently spoke with the Associated Press. She said she worried security forces would target her for the rest of her life. For that reason, she did not give her last name.

She wanted to get to safety in Germany. So, she started the trip. The last part included a long walk through the Eastern European country of Belarus to the Polish border.

One time she made it to the border but was chased away by Polish guards. At that time, a friend got so scared she fainted. The group she was with tried to hide in ditches and behind trees so they would not get caught. But the guards found the migrants and took them back to Belarus.

But Bushra tried a second time.

Along the way, she hurt her leg.

She slept outside with other travelers on cold nights. One night it was so cold that a friend broke a tooth because her teeth were chattering so much.

At last, she reached a village in Poland where people took them to Germany in a car.

"I put up with unbearable pain," Bushra said. She added, "Running away from something is sometimes the easiest thing."

About 90 percent of people in Syria are very poor. Twenty percent more people need help this year, a total of 13 million. The Syrian government cannot help them. Inside of Syria, almost 7 million people are considered internally displaced, which means they are no longer living in their homes.

Syrian people are going to Europe although many countries in Eastern Europe do not want them. Among those who tried to make it to Europe through Belarus, 15 people died.

Bushra said she is surprised that she was able to "put up with" the whole trip.

But it was worth it, she said.

"When you lose hope, you follow a path more dangerous than where you started."

She said she is trying to live a free life. "I am done with restrictions."

Bushra said if she does not get permission to stay in Germany, she will try somewhere else.

Dan Friedell wrote this story for Learning English a report from the Associated Press. Mario Ritter, Jr. was the editor.

Do you know people who have a story like Bushra? Tell us in the Comments Section and visit 51VOA.COM.

minimum – adj. as little as possible or the lowest that is permitted

ditch – n. a long, narrow hole often along a road that carries water away

unbearable – adj. too bad or difficult to be accepted or suffered

chatter –v. to make a noise from two things knocking together (such as teeth when a person is cold)

desperate – adj. very sad and upset because of having little or no hope