The Growing Threat From Extremist Groups

Update Required To play the media you will need to either update your browser to a recent version or update your Flash plugin.
By VOA
09 September, 2013

Welcome to As It Is, from VOA Learning English.

Today, we tell about the struggle facing Iraq and other countries to care for the thousands of refugees fleeing the conflict in Syria.

Then, Kelly Jean Kelly tells about a planned free-trade area in Central Africa. The plans were approved 20 years ago, but have yet to be carried out. We will look at why that is.

But first, Jim Tedder reports on the growing threat from extremist groups to European nations.

The Threat of Anti-Islam Extremism in Britain and Europe
The British government recently warned that anti-Islam extremism is a real threat to security in the country. The warning comes as some observers have noted increasing activity among what they call "counter-Jihad" groups across Europe. As we hear from Jim Tedder, those groups are reported to be seeking new members.

Anders Breivik killed 77 people in Norway in July of 2011. He claims he carried out the attacks to save Norway and Europe from an Islamic takeover.

After the attacks, Britain added far-right extremism to its planning for fighting terrorism. James Brokenshire is the country's Minister for Crime and Security. He says one in 10 cases of extremism now under investigation is linked to what he calls the far right.

Investigations showed Anders Breivik was not an active member of an extremist group. But they did find he was active on nationalist and anti-Islam websites.

Breivik was known to support the anti-Islam English Defense League. The EDL has helped set up similar organizations across Europe. 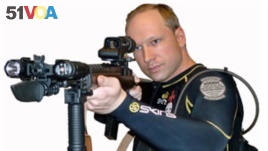 A picture of Anders Behring Breivik taken from a book downloaded from a link posted on a Norwegian discussion website entitled '2083 - A European Declaration of Independence', is seen in this screen grab made July 23, 2011
Last August, activists from across the continent gathered in Stockholm, Sweden. Among them was the EDL's organizer, who calls himself Tommy Robinson.

"It's about us sharing ideologies, sharing resources, and working together in any way we can, over the next 12 months, in order to highlight the truth, the truth about Islam."

The British government says the cases of far-right extremism that it is fighting are, in its words, "self-starting groups and individuals." Again, Britain's Minister for Security James Brokenshire.

"The far-right threat is not as widespread or systematic as the al-Qaida-inspired threat. And, operationally, there are vast differences. But we also notice that at the same time, at its core, the far right appeals to people who share many of the same vulnerabilities as those exploited by al-Qaida inspired extremism."


Caring for Syrian Refugees
The United Nations says Iraq needs to identify more land on which to shelter the large number of Syrian refugees entering the country. The UN High Commissioner for Refugees says the problem is especially severe in the Kurdistan area of Iraq.

Agency spokesman Adrian Edwards says 800 to 900 refugees are arriving there every day. He says this is two times as many as just three months ago.

"The numbers are increasing so fast that capacity to accommodate is becoming a very real, very immediate problem. It is a problem around the region...but right now it's acute in Iraq."

Adrian Edwards says the situation is especially worrying at the Domiz camp in northwest Iraq. He says the camp holds about 35,000 Syrian refugees and is very overcrowded. 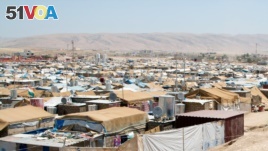 The Domiz camp is severely overcrowded and was only built to house about half of the people currently living there. (Phillip Wellman for VOA)
"The crowding is in turn having an impact on sanitation, which is already below standards. Congestion and warmer temperatures are increasing vulnerability to outbreaks of disease, and fueling tension between camp residents."

Mr. Edwards says the UNHCR has been working with Iraq's central government and officials in Kurdistan since October to find more space for Syrian refugees.


The Challenge of Creating a Free-Trade Area in Africa
It has been more than 20 years since six African nations agreed to create the Economic and Monetary Community of Central Africa. The six nations agreed to lift trade barriers. Yet there has been little progress in creating a free-trade area. Central Africa
Reporter Moki Edwin Kindzeka recently visited the border where Cameroon, Equatorial Guinea and Gabon all meet. He found the movement of people and goods is as controlled as ever.

Kelly Jean Kelly has his report.

The town of Kiossi in Cameroon is on the main road leading to Equatorial Guinea and Gabon. People living along the border say they are unable to travel and trade freely.

Freedy Becke, a 29-year-old reporter, says people are dissatisfied with the integration plan. He claims that police in Equatorial Guinea and Gabon have made threats to Cameroonians. Some Cameroonians reportedly were forced to return home.

Heads of state from CEMAC did approve a common passport to make it easier to travel and do business. But it has not been accepted by all local officials. Many immigration officers still demand that people have visas before they can cross the border.

Almost 50 million people live in the six countries -- Gabon, Cameroon, the Central African Republic, Chad, the Republic of the Congo and Equatorial Guinea. A history of conflict and a lack of development are two reasons why there has been little to no progress in establishing a free trade area.

Chantale Elombat is the director of cooperation and integration at CEMAC. She says the leaders of the six countries want to work together. She is hopeful that they will take steps to do so.

And that's "As It Is," our daily show from VOA Learning English.

Thanks to Jim Tedder and Kelly Jean Kelly for their reports.

Every day on "As It Is," we have in-depth reports on the issues that concern you. We also talk with experts and VOA reporters to help make sense of our fast-moving and ever-changing world.

We want to hear what you want to hear about on "As It Is." So let us know -- send an email to special@voanews.com -- or go to our website 51voa.com and click on "Contact Us."

Remember, for the latest world news, listen to VOA news at the beginning of every hour Universal time.

I'm Christopher Cruise, and that's As It Is from VOA Learning English from The Voice of America.
Related Articles
go top