Update Required To play the media you will need to either update your browser to a recent version or update your Flash plugin.
By Pete Musto
13 August, 2016


Studying at a university in his home country of Syria made Amer Horani very proud.

But that was before the war in Syria forced him to leave his country.

Horani was the first in his family to attend a university. He began studying psychology at Damascus University in 2012. He dreamed of using his education to help others. 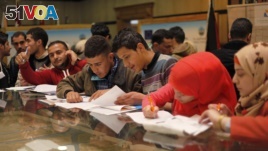 Syrian refugee students attend an informational meeting at Zarqa University in Zarqa, Jordan in January. They seek to apply for the EU scholarships or learn more about the grants. The scholarships would enable them to study at a number of colleges, not ju

Then his friend, also a student, disappeared.

"The army came for him. I never saw him again," Horani told VOA. The disappearance of his friend was one reason the 22-year-old chose to leave Syria. He left after completing only eight months of his studies.

Horani and many other Syrians were forced to abandon higher education to become refugees.

"Everything is bad here," Horani said. He now works in a small convenience store in Beirut, the capital of Lebanon.

More than one million refugees live in Lebanon. Some Lebanese do not want them there. The refugees also face difficult living conditions and restrictions on job opportunities.

"Sometimes it feels like I have lost everything here, my life has stopped," Horani said. "I'm not a criminal, I'm not bad. I just want to study."

At one point, at least 250,000 students studied at universities in Syria. Now experts suggest that almost 200,000 students have fled the country.

There are many reasons that refugees are prevented from re-entering higher education. The biggest reason is the lack of money to pay the cost. Also studying in a different country may mean they must learn in a language that is not their own. Or the refugees may not have the right documents to register at a university in their new country.

Allan Goodman is the president of the Institute of International Education, or IIE. The IIE is an organization that studies and supports the exchange of students between countries.

"This is the most challenging higher education emergency we have ever faced," Goodman said.

International media have brought attention to the efforts of Syrian refugees to reach Europe. However, over 4.5 million refugees are now living in countries close to Syria like Lebanon, Turkey and Jordan.

These countries already struggle to accept and help these refugees. But, support efforts continue.

In Lebanon, the Ministry of Education and several United Nations agencies are discussing the problem. They are working to make 300 scholarships available to refugees this year.

Estimates suggest 10,000 Syrians are enrolled in higher education programs in Lebanon. One report says about 5,000 people are enrolled in Turkey. Turkey has offered almost 1,000 scholarships.

But, those numbers do not show how many of those Syrians are refugees.

Goodman said, "I'd be amazed if the number of Syrian [refugees] back in higher education were more than a few thousand."

"There's not the capacity in Jordan or Lebanon or even Turkey," he said.

Efforts to solve this crisis have spread all over the world.

Other groups also are creating different ways to help.

The program will help students beginning their studies in 2017. Roque hopes to raise enough money for 20 scholarships. This would cost around $320,000.

"I can't believe how many emails we've been getting – some have said that this is their last chance [to get higher education]," Roque said. She asks others to follow her example.

"We are students too," she added. "We just happen to be luckier than them."

But the gap between refugees' needs and what is offered is still very large.

Goodman says there is already one example of how refugees can really be helped. During World War II, a university designed for refugees was created in New York. Goodman says the IIE is investigating the idea of re-creating this university.

For Syrian refugee Amer Horani, getting back into university is still a major challenge.

But, his desire to become a psychologist is still very strong. He knows that in his war-torn country, his training and skills would be more important than ever.

"After the war," Horani said, "everyone in Syria is going to need someone."

John Owens reported on this story for VOA News Pete Musto adapted it for VOA Learning English. Mario Ritter was the editor.

We want to hear from you. What other ways can universities, governments and other organizations help refugees complete their higher education? Write to us in the Comments Section or on 51VOA.COM.

abandon – v. to stop doing or having something

convenience store – n. a small store that is open for many hours of the day

scholarship(s) – n. an amount of money that is given by a school, or an organization to a student to help pay for the student's education

enroll(ed) – v. to enter someone as a member of or participant in something

gap – n. a difference between two people, groups, or things