Update Required To play the media you will need to either update your browser to a recent version or update your Flash plugin.
By John Russell
24 June 2022


Some Syrian young people are learning that dance is a healing release from their many war-related worries.

For an hour each week, they study Latin dance at a school in Damascus. Recently, the group stepped energetically to the sounds of salsa music.

The students are led by 42-year old Adnan Mohammed, a teacher at the dance school. This group is learning the basics of Latin dancing. 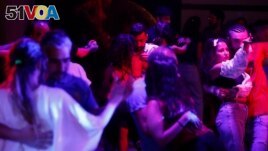 Mohammed says the class helps his students forget the troubles of war — if even for a short time.

After class, "They come out a different person," he said.

"I believe we are giving them the energy to stay in the country," he added. "Now there is a reason for them to stay."

More than 500,000 people have died in Syria's civil war, which began in 2011. Syrian President Bashar al-Assad's military forces have crushed most areas of uprising. Rebels remain in control of a few areas.

For the past several years, conflict lines have been frozen. But, damaged areas have not been rebuilt. An economic crisis has set in, also. Many Syrians are struggling to find work and make enough money to meet the needs of life.

Mohammed first opened a dance school 15 years ago. He says people still kept coming to his classes throughout the war.

But the coronavirus pandemic was an unbreakable barrier to business. It shut everything down.

With pandemic restrictions now mostly lifted, students have returned to class, looking for a temporary escape.

Yara Zarin is an engineer who is also a teacher at the Dance Nation school, where Mohammed teaches.

"People are exhausted nowadays, we can sense a lot of frustration," Zarin said.

Zarin explains that the school's goal is to provide the space where, for "an hour or two ... you can be yourself."

The dance school offers classes during the week and also dance parties.

Small performances have made a comeback in the country recently, especially in and around Damascus. Last month, hundreds of young people gathered for a techno dance party at a former factory near the city. The event included music, dancing and a big laser light show. The party was one of the biggest public entertainment events since the war started.

Ballroom dancing schools were popular before the war among some parts of Syrian society, including three large schools in Damascus that have survived the war.

For student Amar Masoud, the dance classes are a "breath of life."

"Sometimes, I end up missing classes because I have to work," he says. "But I still try as much as possible to" come to the school.

Mohammed, the teacher, has a second day job to keep up with expenses. He asks for government support to help bring back dance to how it was before the war. He dreams of representing Syria in international events.

"There needs to be a federation created just for dance so that this can be like before the war, where we would go and represent Syria in Arab and Asian countries," he said.

For Maya Marina, age 30, dancing helps her deal with difficulties.

"Music takes us to another world," she says. Marina adds that dancing is a break "from the pressures, the anger, the difficulties."

Omar Sanadiki reported on this story for the Associated Press. John Russell adapted it for VOA Learning English.

techno – n. a type of electronic dance music that has a fast beat

frustration – n. a feeling of anger or annoyance caused by being unable to do something : the state of being frustrated

federation – n. an organization that is made by loosely joining together smaller organizations