T. rex Debate: One or Three?

Update Required To play the media you will need to either update your browser to a recent version or update your Flash plugin.
By John Russell
30 July 2022


Tyrannosaurus Rex, or T. rex, has long been one of the most famous dinosaurs. Now, researchers are debating whether the giant meat-eating tyrannosaurus should be considered as one species or three different species.

Since 1905, T. rex has been recognized as the single species of the genus Tyrannosaurus. A genus is a larger grouping of related organisms than a species.

But three researchers, led by independent paleontologist Gregory Paul of Baltimore, Maryland, argued in March 2022 that three T. rex species should be recognized. 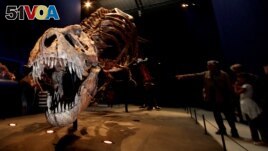 FILE - Visitors look at a 67 million year-old skeleton of a Tyrannosaurus Rex dinosaur, named Trix, during the first day of the exhibition "A T-Rex in Paris" at the French National Museum of Natural History in Paris, France, June 6, 2018. ( REUTERS/Philippe Wojazer)

The researchers said their study was based on differences in the thickness of the thighbones and the shape of the lower front teeth. They based their claims on over thirty Tyrannosaurus specimens.

In July, another group of paleontologists argued that the March study did not offer enough evidence to show that there were three Tyrannosaurus species. They suggested the previous study did not use correct mathematical methods or measurements.

University of Edinburgh paleontologist Steve Brusatte was a co-leader of the new study published in Evolutionary Biology in July.

"The evidence needs to be convincing, and to suddenly divide such an ... animal like T. rex, which has been known for over a hundred years, into different species requires a high burden of proof. It is true that there is variation in the size and shape of T. rex bones, but in our new study we show that this variation is minimal," Brusatte said.

Tyrannosaurus was part of a group called theropods that included all the meat-eating dinosaurs. It had a large head and powerful bite strength. It walked on two strong legs and had small arms with just two fingers.

The new study looked at differences in thighbone thickness in four other meat-eating dinosaurs and 112 species of living birds. They found that the Tyrannosaurus differences were normal or usual.

"It is normal for any species to be variable in size and shape. Just look at the range of height and waistlines and toothy grins in people today, all of whom are members of a single species...," Brusatte said.

Gregory Paul, however, criticized the new study as "not a proper scientific study." Proper is a term that means correct.

He added that there is something about T. rex that causes people to become concerned or worried to a degree not seen with other ancient organisms.

"Had our paper been about the species of, say, the also gigantic Argentinian theropod Giganotosaurus there very likely would not have been so much fuss and bother," Paul added.

Tyrannosaurus lived in western North America during the Cretaceous Period – a time near the end of the dinosaur age. Perhaps the largest-known Tyrannosaurus is one named Sue at the Field Museum in Chicago. Sue's skeleton is 12.3 meters long.

specimen -- n. something (such as an animal or plant) collected as an example of a particular kind of thing

variation – n. something that is similar to something else but different in some way

fuss – n. activity or excitement that is unusual and that often is not wanted or necessary