Tag Questions Are Easy, Aren’t They?

Update Required To play the media you will need to either update your browser to a recent version or update your Flash plugin.
By Dr. Jill Robbins
11 September, 2015


Have you ever been in a conversation and wanted to check your understanding? That is the time to use a tag question in English.

I was visiting a friend and saw a photo on the wall. I said,

"That's a picture of your grandson, isn't it?"

"Yes, it is. That picture is from when he was two. He's a lot taller now."

In the example, I wanted to confirm something I thought was true. So I started with a positive statement, "That's a picture of your grandson" then I added a negative tag question: "isn't it?" My friend said I was right - the picture was of his grandson.

English speakers use tag questions to encourage a listener to respond. You will often hear teachers using tag questions:

"You remember the history lesson from last week, don't you?" 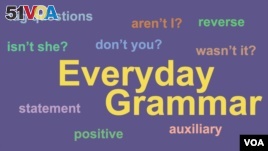 We'll talk first about tag questions that follow a positive statement with the verb be. They use a reduced form, or contraction. Make the tag question with a form of the verb be combined with the negative not and the pronoun. The verb be has to match the number and person of the pronoun. Take a look at these examples:

They are walking to school, aren't they?
She is taking the bus, isn't she?
I am supposed to be sitting here, aren't I?
You're the math teacher, aren't you?

In these examples, you reverse the order of the pronoun and verb in the tag question. "They are" becomes "aren't they?" and "She is" becomes "isn't she?"

If the statement uses another verb instead of be, the tag question uses an auxiliary verb such as do or have. For example, in the song A Little Time the singing duo Beautiful South ask the question,

You need a little room for your big head,
Don't you, don't you?

Your face has been looking like that for hours
Hasn't it, hasn't it?

If you ask a negative tag question you expect a positive answer.

Question: It's raining out, isn't it?
Expected answer: Yes, it is.

Now let's look at tag questions that follow a negative statement. These are in the affirmative. You can use this to confirm that what you are thinking is true, and you expect a negative answer.

Question: You don't eat all the cake, did you?
Expected answer: No, I don't.

Negative sentences with positive tag questions are not as frequent as our first type. They use the same form, with reversed word order.

In Understanding and Using English Grammar, Betty Azar says that the intonation (change in pitch) shows the purpose of a tag question. If the speaker is trying to confirm information, the tone rises:

Adam works at VOA, doesn't he?

Speakers saying something that they are almost certain the listener will agree with use a falling intonation.

We leave you with a famous line from Carly Simon, in the song You're So Vain:

confirm – v. to state or show that (something) is true or correct

reverse – v. to change the order or position of (two things or a series)

intonation – n. the rise and fall in the sound of your voice when you speak

Now it's your turn. Write a sentence with a tag question in the comments. We'll give you feedback.