Update Required To play the media you will need to either update your browser to a recent version or update your Flash plugin.
By Bryan Lynn
07 February, 2018

The U.S. Geological Survey said the 6.4 magnitude earthquake hit around the middle of the night local time near the coastal city of Hualien. Search and rescue operations continued in an effort to save dozens of people missing.

Taiwan's President Tsai Ing-wen visited the damaged areas. She promised that every effort would be made to rescue survivors. At least 260 people were reported injured and more than 80 are missing.

The earthquake split some roads in half and left about 40,000 homes without water. Nearly 2,000 others did not have electricity. 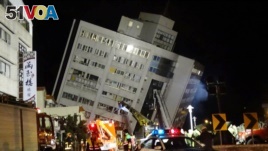 Rescuers are seen entering a building that collapsed onto its side from an early morning 6.4 magnitude earthquake in Hualien County, eastern Taiwan, Wednesday, Feb. 7 2018. Rescue workers are searching for any survivors trapped inside the building.

Some of the most powerful pictures and video of the disaster showed high-rise buildings tilting heavily after the earthquake.

Rescue workers put up steel beams against the building in an effort to prevent it from completely collapsing. Large concrete blocks were also placed against the beams for added support.

The building was among at least four in the area that sank and shifted because of the earthquake. Experts say the shifts were likely caused by soil liquefaction. This process can cause the ground underneath a building to lose its solidity under great physical stress.

Hualien prosecutors said they had launched an investigation. They want to know about possible negligence in construction of buildings that collapsed or tilted from the earthquake, the Taipei Times reported.

Government officials are seeking building records and said they would question companies in the buildings' planning and construction. The investigation will look into whether shortcuts were taken, if poor building materials were used and whether all government rules were followed.

Taiwan sits in a very seismically active area known as the Pacific Ring of Fire. Earthquakes regularly strike the area.

Bryan Lynn wrote this story for VOA Learning English, based on reports from the Associated Press, Reuters, Agence France-Presse and other sources. Mario Ritter was the editor.

lean – v. to bend or move from a straight position

tilt – v. to move into a position where one end or side is higher than the other

residential – adj. of or relating to the places where people live

beam – n. long and heavy piece of wood or metal used to support parts of a building, ship, etc.

shift – v. to move to a different place, position, etc.

negligence – n. failure to take the care that a responsible person usually takes

shortcut – n. a faster or easier way to do something

seismically – adv. relating to or caused by an earthquake