Update Required To play the media you will need to either update your browser to a recent version or update your Flash plugin.
By Susan Shand
29 August, 2018


Over the years, Tajikistan has taken numerous steps to control the lives of its citizens.

The government has rules restricting how long men can grow their beards and the length of women's clothing. It also limits how much food Tajiks are legally permitted to prepare.

Now, the government is trying to control how its citizens are memorialized after they die. 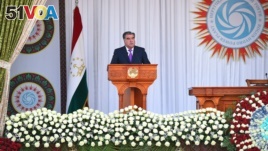 FILE - Tajikistan President Emomali Rahmon has been in power since 1992.

Tajikistan is restricting the size of markers in the country's burial grounds. News of these restrictions come from an official with the government's Committee on Religious Affairs and Regulation of National Traditions. He spoke with Radio Free Europe/Radio Liberty (RFE/RL).

The official said that the rule is meant to limit public signs of the wealth of the dead person and his or her family members.

The state-controlled Jumhuriyat newspaper first reported on the memorial stone rules in February of 2017. But few people paid attention at that time. But in late August 2018, RFE/RL published a story about the rules. Now they appear to be the talk of the mostly Muslim country.

The Jumhuriyat report said that cemetery stones could be no more than 1.5 meters long, 1 meter wide, and 50 centimeters tall. Abdukarim Mustafozoda, an official with the government's religious affairs committee, made the announcement.

The official who spoke with Radio Free Europe/Radio Liberty said the measurements were established by a government declaration. He added that local officials had been told to explain the rule to the public.

There is "no penalty...yet for violating the policy," the official added.

Last year, the government announced measures barring people from crying loudly at funerals, a traditional way of mourning in Tajikistan.

Officials have also set restrictions on the amount of money families can spend on funerals and other family events. One family in southern Tajikistan last year had food for a wedding party seized by officials who said a "wasteful" amount had been prepared.

Concerned about what they consider religious extremism, officials have tightened rules over Islamic organizations and the open expression of religious beliefs. The government already has rules for the length of men's facial hair, baby names and how women tie their head coverings.

The cemetery stone rule, however, is more in agreement with the traditional simple markers found in many Islamic cemeteries.

In announcing the rule last year, Mustafozoda wrote that Tajik cemeteries have become a place for people to show that they are rich.

"(It) is not only wrong, it's also against Islam," he wrote, adding that it was "wasteful and unnecessary." He said families sometimes compete to put up the biggest possible stone.

RFE/RL's Carl Schreck and Mullorajab Yusufzoda reported this story. Susan Shand adapted their report for VOA Learning English. RFE/RL and VOA are both part of the U.S. Agency for Global Media (USAGM), formerly called the Broadcasting Board of Governors. George Grow was the editor.

beard – n. the hair that grows from man's chin

cemetery – n. the place where the dead are buried

penalty – n. the result of breaking the rules