Taking Adjectives to the Extreme

Update Required To play the media you will need to either update your browser to a recent version or update your Flash plugin.
By Alice Bryant
22 October 2020


A friend of mine had a very small wedding last weekend. Only close family attended in person. Everyone else, myself included, watched the ceremony in real time on YouTube. My friend, the bride, looked very, very pretty. She and her new husband were very happy. And I was very glad to see them take this step together.

You probably noticed that I used the word "very" repeatedly in my story. I did it to demonstrate this point: Rather than repeat an intensifier too often, we can usually choose stronger adjectives. We call the strongest adjectives non-gradable, or extreme, adjectives.

Extreme adjectives are the subject of today's Everyday Grammar program.

How do extreme adjectives work?

An adjective is a word that describes the qualities of a noun. Most adjectives in English are gradable: There can be different levels to their qualities. 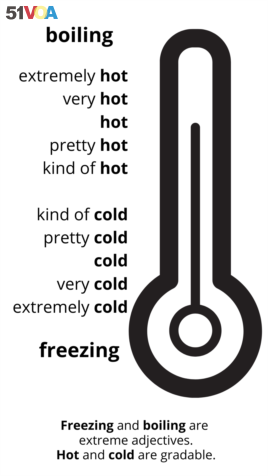 Take the word "funny," which is a gradable adjective. Someone or something can be, for example, kind of funny, pretty funny, very funny or extremely funny. I used adverbs (such as "kind of" and "pretty") to show how strong (or weak) the humor is.

As an English learner, you probably already know some extreme adjectives. Here are a few common ones:

With extreme adjectives, there are a few basic rules. However, English is a constantly evolving language. So, exceptions to these rules continue to grow.

With that in mind, let's discuss the first rule.

Gradable adjectives have comparative and superlative forms while extreme adjectives usually do not.

Here are some examples for gradable adjectives:

Someone might say, for example, "This dish is tastier than that one" or "It is the tastiest dish I have ever had."

With extreme adjectives, we usually avoid comparatives and superlatives. The adjective "excellent" is an example. It means extremely good. Native speakers generally would not say "This show is more excellent than that one" or "It is the most excellent show."

But over the years, spoken English has influenced grammar rules. So, you might hear some extreme adjectives in comparative or superlative form. Take the adjective "delicious." A person might say, "This is the most delicious dish I have ever had." It would not be considered wrong, even in written English.

Knowing which extreme adjectives have these exceptions comes with time and experience. It is not something to memorize from a list.

Rule #2: use other adverbs

With extreme adjectives, we avoid using most adverbs that suggest varying degree, or level.

Many adverbs express the degree of a gradable adjective. You heard some earlier, such as "kind of" in kind of funny and "very" in very good. Other common ones include a bit, a little, and rather. For instance, you could say, "Her house is a bit cold" or "That story is rather dull." The words "cold" and "dull" are gradable adjectives.

But with extreme adjectives, we often avoid using these adverbs. For example, it might sound strange to say, "Her house is a bit freezing" or "That man is rather gorgeous."

Listen to how they are used in sentences:

That comedian is absolutely hilarious.
I am totally exhausted.
The rug looks completely filthy.

Rule #3: adverbs for both

Only a few adverbs can be used with both gradable adjectives and non-gradable (extreme) adjectives. They include pretty, really, so and fairly.

Listen to these speakers using a couple of these adverbs with both gradable and non-gradable adjectives:

So, what can you do with the information you learned today?

Here is something you might enjoy: Choose a day to focus on adjectives. On that day, listen and look for adjectives wherever English is used. When you hear or see one, ask yourself if it is gradable or extreme and if an adverb is used with it. Write down the sentence you heard or saw the words in and note where you found them. This will help you remember them better later on.

intensifier – n. a word (such as really or very) that gives force or emphasis to a statement

dish - n. food that is prepared in a particular way

dull – adj. not exciting or interesting

emphasis – n. a forceful quality in the way something is said or written

rug – n. a piece of thick, heavy material that is used to cover usually a section of a floor