Update Required To play the media you will need to either update your browser to a recent version or update your Flash plugin.
By VOA
21 December, 2015

The official said that two other U.S. soldiers were injured. The official asked not to be named. 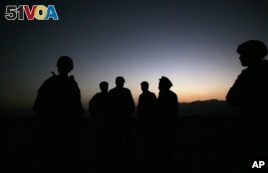 In this Sunday, Oct. 18, 2009 file photo, U.S. Army soldiers stand with Afghan policemen before a joint patrol of Qalanderkhail, outside of Bagram Air Field in Afghanistan. On Monday December 21, a suicide bomber killed six U.S. troops in an attack on a joint Afghan-NATO foot patrol on Monday. An attacker on a motorcycle rammed a group of troops as they patrolled a village near Bagram Airfield. (AP Photo/Maya Alleruzzo, File)

The Taliban took credit for the deadly attack.

A Taliban statement sent to journalists said a suicide bomber riding a motorbike carried out the attack.

In August near Kabul, three attacks within 24 hours left at least 35 people dead. One of the attacks, on a U.S. special operations forces base, killed one U.S soldier and eight Afghan civilian contractors. Another killed three American contractors.