Update Required To play the media you will need to either update your browser to a recent version or update your Flash plugin.
By Dan Friedell
21 December 2022


Women and girls in Afghanistan suffered another setback in their push for equal access to education on Wednesday. Many universities closed their doors to female students hoping to take exams and attend class.

Reports by Voice of America and the Associated Press said young women could be seen crying after they were not permitted to go into their university buildings. Taliban fighters in Kabul and other Afghan cities blocked the students from going into their classrooms.

The action came one day after the Taliban administration shared a letter that said private and public universities should ban women and girls as soon as possible. 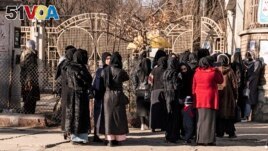 Afghan female university students are stopped by Taliban security personnel next to a university in Kabul, Dec. 21, 2022. (Photo by Wakil KOHSAR / AFP)

Rahimullah Nadeem is a spokesman for Kabul University. He said classes for female students had ended but some were permitted to come inside to finish paperwork and other business. He said four graduation events took place Wednesday.

A student named Fatima attends a private university in Kabul. She told VOA she was supposed to take her final exams on Wednesday. But she and her classmates could not get in.

"All of us were crying and refusing to leave the gates for several hours, and begging Taliban authorities to let us take our exams," she said.

The move by Taliban leaders in Kandahar will hurt the nation's chances of creating diplomatic connections with outside governments. Those governments and other aid organizations have been holding back financial help because of what appears to be the Taliban's return to their extreme version of Islamic law, known as Sharia law.

The Taliban gained control of Afghanistan in the summer of 2021 after U.S. forces pulled out. The new Taliban leadership promised changes that included giving women permission to go to school and have a public life.

Rina Amiri is a human rights adviser for the U.S. State Department. In a Twitter message, she said the decision "removes any doubt that they're reverting to the extreme policies of the 90s."

Before the announcement of the latest restriction on women, the government had banned girls from middle and high school education, restricted women from seeking most work and ordered them to wear burkas -- head-to-toe clothing -- in public.

Two Muslim nations, Qatar and Pakistan, criticized the university ban and asked the Taliban to reconsider the decision.

Antony Blinken is the U.S. Secretary of State. He said no other country prevents women from seeking education.

"The Taliban cannot expect to be a legitimate member of the international community until they respect the rights of all in Afghanistan," Blinken said.

Blinken said the Taliban's restrictions have likely cost the Afghan economy $1 billion because only half of its population is working and studying.

"No country can thrive when half its population is held back," he said.

Antonio Guterres, the Secretary-General of the United Nations, said he was "deeply alarmed" by the decision. He added that it would hurt the country's future.

Experts on Afghanistan criticized the move.

Abdallah Abdallah was a top leader in Afghanistan's former government. He called taking education away from girls "regrettable" in a message published on Twitter.

Ahmad Saeedi, an expert on Afghan politics, said the world must find another way to interact with the Taliban. But "the issue of recognition," he said, "is over."

Dan Friedell adapted this story for Learning English based on reports by VOA and the Associated Press.

setback – n. a failure or defeat

beg –v. to ask seriously for something

revert –v. to go back to something in the past

alarm – n. something that is concerning

interact – v. to mix or work with something