Update Required To play the media you will need to either update your browser to a recent version or update your Flash plugin.
By Jonathan Evans
13 August 2021


As Taliban militants gained control of Afghanistan's second and third largest cities on Friday, the United States and western nations are preparing to send troops to help evacuate workers from embassies in the capital, Kabul.

The capture of Kandahar in the south and Herat in the west after days of clashes is a major loss for the Afghan government. The Taliban also captured the towns of Lashkar Gah in the south and Qala-e-Naw in the northwest, security officers said. 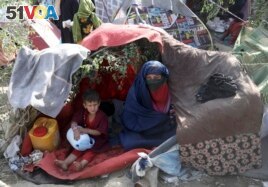 Internally displaced Afghans from northern provinces, who fled their home due to fighting between the Taliban and Afghan security personnel, take refuge in a public park Kabul, Afghanistan, Friday, Aug. 13, 2021. (AP Photo/Rahmat Gul)

Ghulam Habib Hashimi, a council member, told Reuters by telephone from Herat, "The city looks like a front line, a ghost town. Families have either left or are hiding in their homes."

In Kandahar, the birthplace of the Taliban, witnesses said the militants seized the governor's office and other buildings. An official said government forces still controlled Kandahar's airport, which was the U.S. military's second biggest base in Afghanistan.

Since Aug. 6, the militants have taken control of 14 of Afghanistan's 34 provincial capitals. Of Afghanistan's major cities, the government still holds Kabul, Mazar-i-Sharif in the north and Jalalabad near the Pakistani border in the east.

The defeats have raised concerns that the U.S.-supported government could fall to the militants, as international forces complete their withdrawal after 20 years of war. And U.S. intelligence reports said this week that the Taliban could isolate Kabul within 30 days and take it over in 90 days.

On Thursday, U.S. defense officials announced that 3,000 extra troops would be deployed to Afghanistan within 48 hours to help evacuate U.S. embassy workers.

Britain said it would send about 600 troops to help its citizens leave. The Associated Press reported Canada would also deploy special forces troops to Kabul to help in the evacuation of embassy workers. Other embassies and aid groups said they were also getting their people out.

The speed of the Taliban offensive has raised criticism of U.S. President Joe Biden's decision to withdraw American troops - 20 years after they ousted the Taliban following the Sept. 11 attacks on the U.S.

Biden said this week he did not regret his decision. He noted that the U.S. has spent more than $1 trillion in America's longest war and has lost thousands of troops.

U.S. Secretary of State Antony Blinken and Defense Secretary Lloyd Austin spoke to President Ashraf Ghani on Thursday. They told him the United States remained "invested" in Afghanistan's security and stability and is working in support of a political solution.

The fighting has also raised fears of a refugee crisis. A U.N. official said about 400,000 civilians have been forced from their homes since the beginning of the year.

In a deal with former President Donald Trump's administration last year, the Taliban agreed not to attack U.S.-led foreign forces as they withdrew.

The Taliban also made a promise to discuss peace. But meetings with government representatives have gone nowhere.

Jonathan Evans adapted this story for Learning English based on reports from Reuters and the Associated Press. Hai Do was the editor.

evacuate – v. to remove someone from a dangerous place

ghost town – n. a town that no longer has any people living in it;

isolate – v. to put or keep someone or something in a place or situation that is separate from others

provincial – adj. of, relating to, or coming from a province