Update Required To play the media you will need to either update your browser to a recent version or update your Flash plugin.
By Dan Friedell
09 May 2022


The Taliban government in Afghanistan has issued a new order requiring women to cover themselves fully whenever in public.

Taliban leader, Hibaitullah Akhunzada, made the announcement Saturday. He said women must not leave their homes without wearing a burqa. The traditional clothing covers a woman from head to toe, leaving only her eyes visible.

The new restriction comes after more than 20 years of freedom from burqas. In 2001, the United States attacked Afghanistan and ousted its former Taliban government. In the period that followed, women gained many rights, including access to education, work in government and the freedom to wear modern clothing. 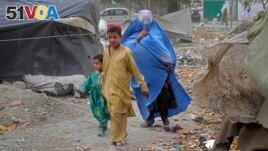 A woman walks in Kabul on Sunday wearing a burqa. The Taliban government said all women must cover their entire body when they are walking outside their homes. (AP Photo/Ebrahim Noroozi)

When the U.S. finally withdrew its forces from Afghanistan last year, the Taliban took control of the country once again. It promised to honor some of the freedoms that women had gained since 2001. That included permission to reject burqas.

Now, that is gone. And it follows other repressive actions toward Afghan females. In March, Akhunzada announced a major change in education policy. He barred females from attending school past sixth grade. He said to permit them more education would violate Islamic law.

However, other members of the Taliban want a more modern leadership. They say without it, Western governments will not work with Afghanistan or provide financial help to the country. The economic support is of high importance as Afghanistan is extremely poor and suffering a food crisis.

Torek Farhadi is a former Afghan government adviser. He said Taliban leaders are disagreeing, but not publicly, because they do not want to show any weakness in government. He said the leaders do not "see eye to eye" but they decided to "put up with each other" out of a concern that the government might fall apart.

Some leaders are working to find a way to permit older girls to go back to school. A representative of the Haqqani network, a powerful group within Afghanistan, said the problem of girls returning to school would soon be "resolved."

In the Afghan capital of Kabul on Sunday, women were seen in customary conservative Muslim clothing. Most wore a traditional hijab, a cover for their hair, but few covered their faces, as directed by the Taliban leader a day earlier. Those wearing a burqa, which covers the face and hides the eyes behind netting, were in the minority.

"Women in Afghanistan wear the hijab, and many wear the burqa, but this isn't about hijab, this is about the Taliban wanting to make all women disappear," said one woman who called herself Shabana. She was wearing a hijab and a long coat.

Another woman, Arooza, said the Taliban will push many Afghans out of their country. "Why should I stay here if they don't want to give us our human rights? We are human," she said.

Obaidullah Baheer is a visiting scholar at the New School in New York. He agreed with the women.

He said the new rules are an attempt to "erase a whole gender and generation of Afghans who grew up dreaming of a better world." The restrictiveness may lead to rebellion against the Taliban.

When the Taliban took over, Baheer said, it would not have taken much to satisfy most Afghans. But the group is quickly wasting its chance to gain support, he said.

visible – n. able to be seen

netting – n. a fine material woven together to cover an opening

scholar – n. a person who has studied a subject for a long time

erase – v. to wipe away evidence or history of something