Taliban Fires Guns to Break Up Women’s Protest in Kabul

Update Required To play the media you will need to either update your browser to a recent version or update your Flash plugin.
By Dan Friedell
29 December 2021


VOA spoke to people in Kabul, Afghanistan, on Tuesday who said they saw Taliban security forces fire guns in the air to break up a women's protest.

Afghan women marched through the streets to protest new restrictions put out by the Taliban on Sunday. The restrictions limit how far women can travel without a close, male, family member.

The new rules said women cannot go more than 72 kilometers from home by themselves. In addition, taxi drivers are not permitted to give rides to women who are not wearing a hijab, or headscarf. 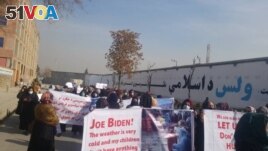 Women are shown on Dec. 28 walking through the streets of Kabul protesting their treatment under the new Taliban government.

Sadiq Akif Mahajer is the spokesman for the Taliban's Ministry for the Promotion of Virtue and Prevention of Vice. He said the new rules are within the limits of what is allowed under Sharia, or Islamic, law.

The rules also now prevent taxi drivers from playing music in their cars. It also asks them to grow facial hair and take time out to pray each day.

On Tuesday, women walked together to the ministry, holding signs that read: "we are tired of discrimination" and "we are the voice of hungry people."

Protesters demanded work, food and education and asked: "Why have you closed schools?"

One protester, Hoda Khamush told VOA that the security forces fired shots in the air as the women got closer to the ministry building and some tried to enter.

During the previous Afghan government, the building was the home of the Women's Affairs Ministry.

Khamush said the shots injured some protesters, but VOA could not verify her claim.

Taliban officials did not comment on the incident Tuesday.

Television channels, however, did show video from the protest.

Since the Taliban took back Afghanistan after the United States military announced it would leave the country earlier this year, boys have been permitted to go to school. Girls are still waiting for permission.

Most women are waiting for permission to return to work.

When the Taliban took power in Afghanistan in August, the group said it would not bring back the same restrictions it had imposed during its earlier rule, which lasted from 1996-2001.

U.S. Vice President Kamala Harris told the American broadcaster CBS that she is concerned that the Taliban is not treating women and girls well. In a conversation shown Sunday, she called it "a big issue" in any future diplomatic discussions with the group.

The U.S., other western governments, and some banks are holding back billions of dollars in financial aid to Afghanistan. The Taliban says the U.S. should release over $9 billion of its wealth and remove financial restrictions because the new government is representative of the Afghan people.

The country is currently suffering. The United Nations estimates 23 million people do not have enough food due to years of war, bad weather, and poverty.

Ayaz Gul wrote this story for VOA. Dan Friedell adapted it for Learning English. Susan Shand was the editor.

What can you do to support the women of Afghanistan? Tell us in the Comments Section and visit 51VOA.COM.

previous – adj. existing or happening before the present time

verify – v. to prove, show, find out, or state that (something) is true or correct

fiction – n. something that is not true

diplomatic – adj. involving the work of maintaining good relations between the governments of different countries : of or relating to diplomats or their work