Update Required To play the media you will need to either update your browser to a recent version or update your Flash plugin.
By VOA
29 July, 2015


Afghan government officials said Wednesday that Taliban chief Mullah Omar is dead. They say he died more than two years ago in Pakistan.

A government statement said the findings were based on what it called "credible information."

The Taliban earlier this month said Mullah Omar is alive.

In Washington, the Obama administration said it could not confirm the report that the Taliban leader is dead. 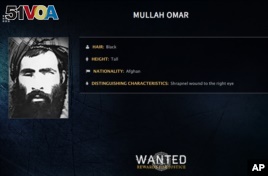 FILE - In this undated image released by the FBI, Mullah Omar is seen in a wanted poster. An Afghan official said his government is examining claims that reclusive Taliban leader Mullah Omar is dead.

U.S. lawmakers urged top administration officials Wednesday to provide details about the group that is to enforce a nuclear deal with Iran.

The administration officials, including Secretary of State John Kerry, appeared before the Senate Armed Forces Committee. The officials urged the lawmakers to approve the nuclear deal. It was reached earlier this month at a meeting in Vienna, Austria.

Congress has 60 days to review the Iran nuclear agreement. Members of the House and Senate have been questioning top members of President Barack Obama's administration.

Turkish warplanes bombarded Kurdish militants in northern Iraq Wednesday. A few hours before, Turkish President Recep Tayyip Erdogan had said it was impossible to continue peace efforts with the Kurds.

Two Zimbabweans arrested for illegally hunting a protected lion named Cecil appeared in a court in Harare Wednesday. The men – a professional hunter and a farm owner – are accused of helping American dentist, Walter James Palmer, hunt the lion.

Zimbabwean police said they are looking for Mr. Palmer, who killed the animal. He reportedly told an American news broadcaster that he regretted the action and thought he was hunting the lion legally.

credible – adj. able to be believed: reasonable to trust or believe

review – v. to look at or examine (something) carefully especially before making a decision or judgment