Update Required To play the media you will need to either update your browser to a recent version or update your Flash plugin.
By Jim Dresbach
21 January, 2016

The bombing took place in a western part of Kabul at Tolo TV. The bomber crashed a vehicle full of explosives into a bus transporting employees of the television station to their homes.

The blast killed at least seven people and wounded 24 others. VOA news reported that women and children were among the victims. 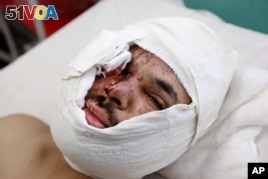 Hasib Sadat, an Afghan journalist injured from yesterday's suicide attack near the Russian Embassy, lays on a bed at a hospital in Kabul, Afghanistan, Jan. 21, 2016.

Tolo TV is the biggest television station in Afghanistan. Dozens of journalists are employed by the news group.

The Taliban said the violence was meant to punish Tolo TV for broadcasting anti-Afghan and anti-Taliban programs. A Taliban spokesperson called Tolo TV a "spy agency."

The attack against the Afghan media created outrage throughout the world as an attack on freedom of speech.

The Committee to Protect Journalists, a New York-based group, said the "attacks aimed at crushing independent media organizations in Afghanistan are a direct assault on the very foundation of Afghan democracy [and] a free and open press."

Ayaz Gul reported on this story for VOANews. Jim Dresbach adapted this story for Learning English. Kathleen Struck was the editor. We want to hear from you. Write to us in the Comments Section or visit our 51VOA.COM.

assault – n. being attacked or criticized