Update Required To play the media you will need to either update your browser to a recent version or update your Flash plugin.
By Bryan Lynn
06 December 2022

The move came although the Taliban earlier banned girls from attending middle and high school.

The Associated Press reported the decision was communicated in documents written by Afghanistan's Ministry of Education. 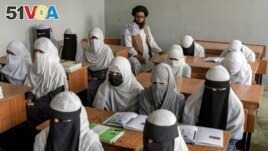 Two documents seen by the AP suggested the exams would be given in 31 of the country's 34 provinces, where the winter school break starts in late December. The three excluded provinces – Kandahar, Helmand and Nimroz – have a different plan for the school year and graduation exams there usually take place later.

Ehsanullah Kitab is head of the education department in the capital, Kabul. He told the AP the exams would take place on Wednesday. But he provided no additional details and it was not clear how many teenage girls would be able to take the exam.

One document, from Kabul's education department, said the exams would last from 10 a.m. to 1 p.m.

One 18-year-old girl criticized the Taliban's offering. The girl, who only identified her first name, Najela, told the AP she would now be in 12th grade and eligible for the exam. But, she said she had spent the whole year out of school facing "tension and stress."

"How can we possibly take an exam after a year and a half that the Taliban have kept school doors closed," she added.

The Taliban took over Afghanistan in August 2021 as American and NATO forces were in the final weeks of their pullout from the country after 20 years of war. At first, Taliban leaders promised a moderate form of government rule and to respect women's and minority rights. But since taking over the country, the Taliban has widely restricted rights and freedoms and put in place their extreme version of Islamic law, known as Sharia law.

The Taliban has banned girls from middle school and high school and restricted women from most employment. It has also ordered women to wear clothing that fully covers their bodies in public. Women have also been banned from parks, exercise places called gyms, and some public events.

However, women have not been restricted from attending universities. The latest decision is believed to be a way for Afghan girls, who receive a high school diploma after Wednesday's exam, to be able to register to attend universities.

A Kabul high school official told the AP she was informed that 12th grade girls will have just one day to take exams in 14 subjects, with 10 questions from each subject. The official did not provide her name because of a fear of possible government reprisals.

She said most girl students lacked textbooks. "Giving an exam is meaningless," she added.

Students and their female teachers will all have to wear the hijab, the traditional Islamic head covering, under existing Taliban rules for women. Smartphones will be banned during the exam. Girls who cannot attend or who fail Wednesday's exam would be permitted to retake it in mid-March, after the winter break.

The Taliban treatment of women and girls in Afghanistan has come under heavy criticism. Earlier this month, a team of United Nations experts said it may amount to a crime against humanity. The U.N. has called for the issue to be investigated and prosecuted under international law.

eligible – adj. able to do something because you have met the necessary requirements

stress – n. feelings of worry caused by difficult situations such as problems at work

diploma – n. an official document showing that someone has completed a course of study

reprisal – n. something violent or unpleasant done to punish an enemy for something they have done

prosecute – v. to officially accuse someone of a crime in a court of law